A New Geological Era? Carleton Research at Crawford Lake Could Help Pinpoint Start of the Anthropocene

Next month, if the ice is thick enough, Carleton University environmental geologist Tim Patterson plans to return to Crawford Lake with his research team to extract another “freeze core” from the lakebed.

The lower reaches of this small, steep-sided, deep lake — located in a conservation area just west of Toronto — are chemically distinct and permanently isolated from the waters above, making it inhospitable to most organisms. The sediments at the bottom thus remain undisturbed, with distinct layers deposited annually.

So when Patterson pushes a flat-faced metal rod filled with a slurry of dry ice and alcohol into the lakebed, the sediment that freezes to it provides a perfectly preserved tree-ring-like record of industrial emissions, radioactive elements and other chemical signals released into the atmosphere over the years. 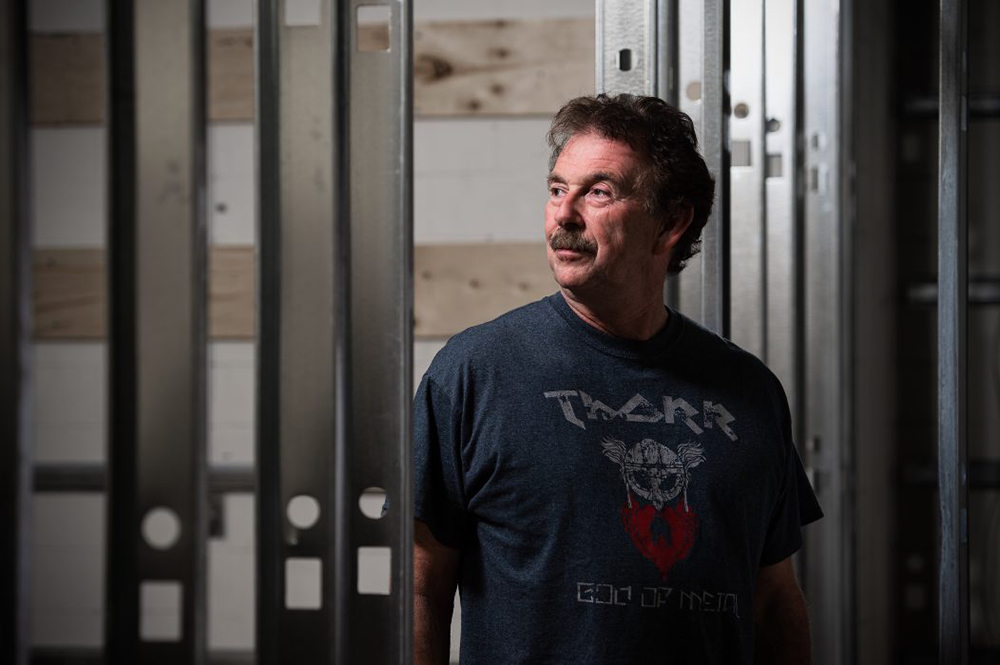 After being winched out of the lake, these core samples, up to two metres tall and 15 centimetres wide, are analyzed by Patterson and his students in their lab at Carleton, as well as by a large team of national and international collaborators, including Indigenous partners.

The data they come up with is a key part of the campaign to have Crawford Lake declared the “golden spike” for the Anthropocene — ground zero for the start of a new geological epoch, circa 1950, in which unprecedented human activity has had a significant impact on the planet’s climate and biosphere.

“This is a tremendous opportunity to show people how sensitive our world is to human activity,” says Patterson, who also does freeze core field work to help monitor and safeguard the environmental health of lakes in northern Canada.

“The concept of the Anthropocene has captured the imagination of both the general public and the scientific community. It would be a great honour to have the golden spike here in Canada.” 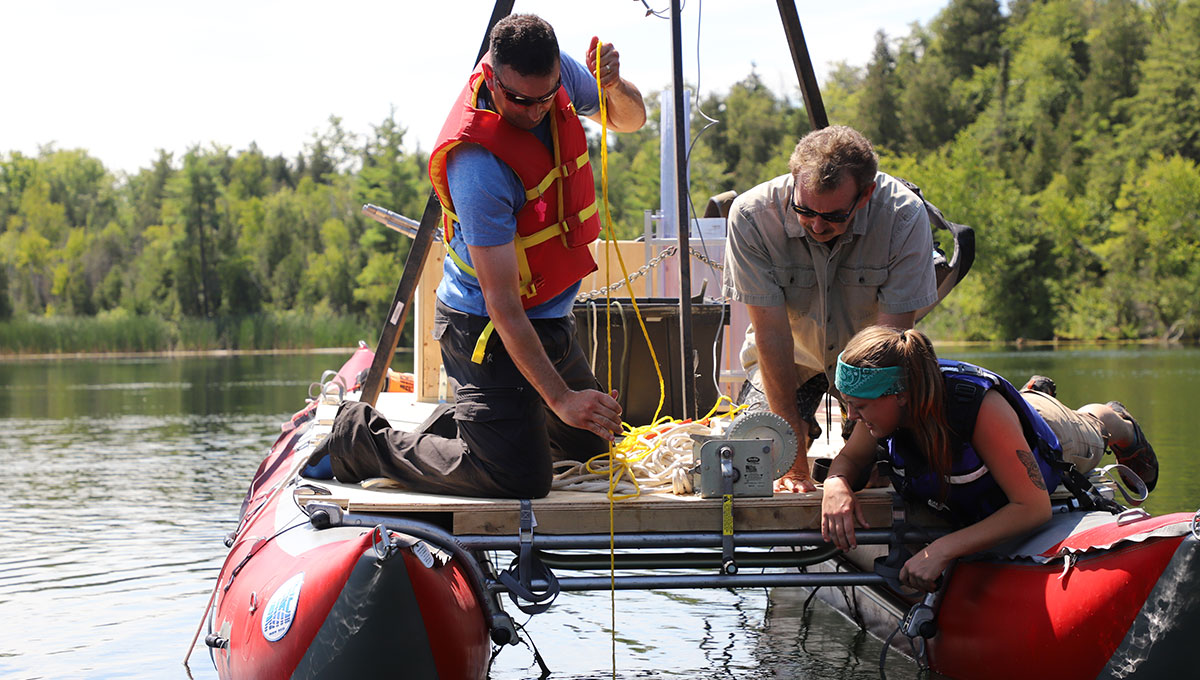 The international process to select a golden spike for the Anthropocene goes back nearly 15 years, when members of the Anthropocene Working Group (AWG) started to debate whether this is indeed a new geological epoch and, if so, when it began.

In 2019, they voted to recommend the middle of the 20th century, when soaring human populations, industrial pollution and greenhouse gas emissions, as well as plutonium isotopes from nuclear testing, altered the planet’s systems. 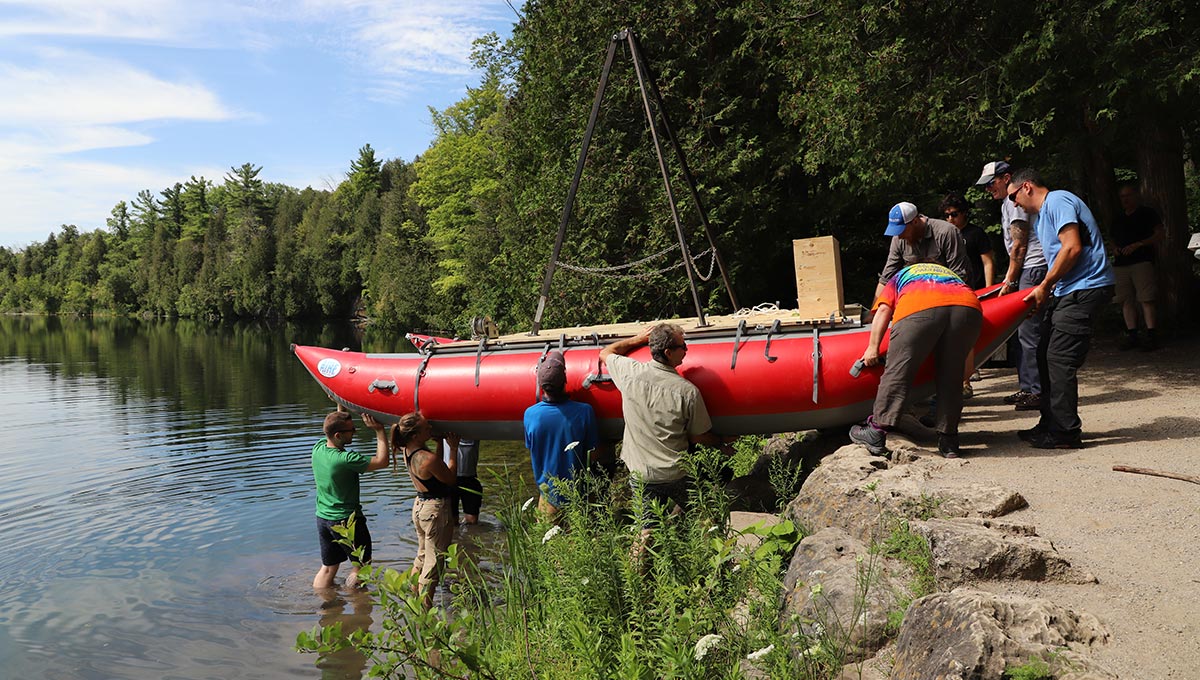 The research team prepares to launch a boat at Crawford Lake.

Since then, the AWG, which operates under the umbrella of the International Commission on Stratigraphy (ICS), has narrowed down the list of golden spike candidates to nine. In addition to Crawford Lake, the list includes marine sediment from Beppu Bay in Japan, a coral core from Flinders Reef in Australia and a peat bog in Poland, among other locations.

Ultimately, the layers of voting — like the strata of a lakebed — will continue until the International Union of Geological Sciences, the parent body of the ICS, makes the final decision, which could happen later this year.

For now, Patterson will continue to conduct the field work that’s at heart of the Crawford Lake bid, using freeze core extraction and analysis methods that he and his collaborators have developed and are constantly enhancing. 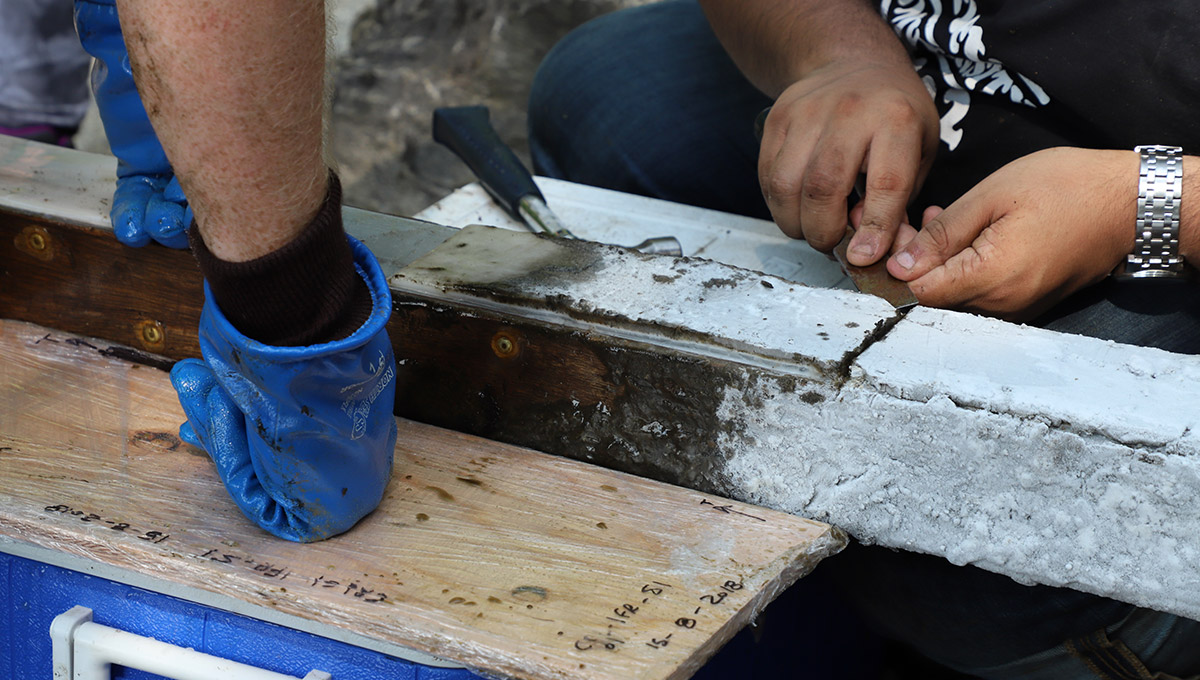 The research at Crawford Lake is co-led by Patterson and Brock University’s Francine McCarthy and Martin Head, both members of the AWG.

When McCarthy realized she needed a freeze core expert for the project, she contacted Patterson, whom she had met when they were undergraduates together at Dalhousie University.

Patterson has been using freeze cores in his research for around 25 years. They preserve an undisturbed record of paleolimnological change and are more accurate than conventional coring techniques.

At Crawford Lake, the Carleton team is also looking at the concentration of chrysophytes and diatoms, shelled microorganisms whose populations are very sensitive to agriculture runoff, acid rain and other by-products of human activity. 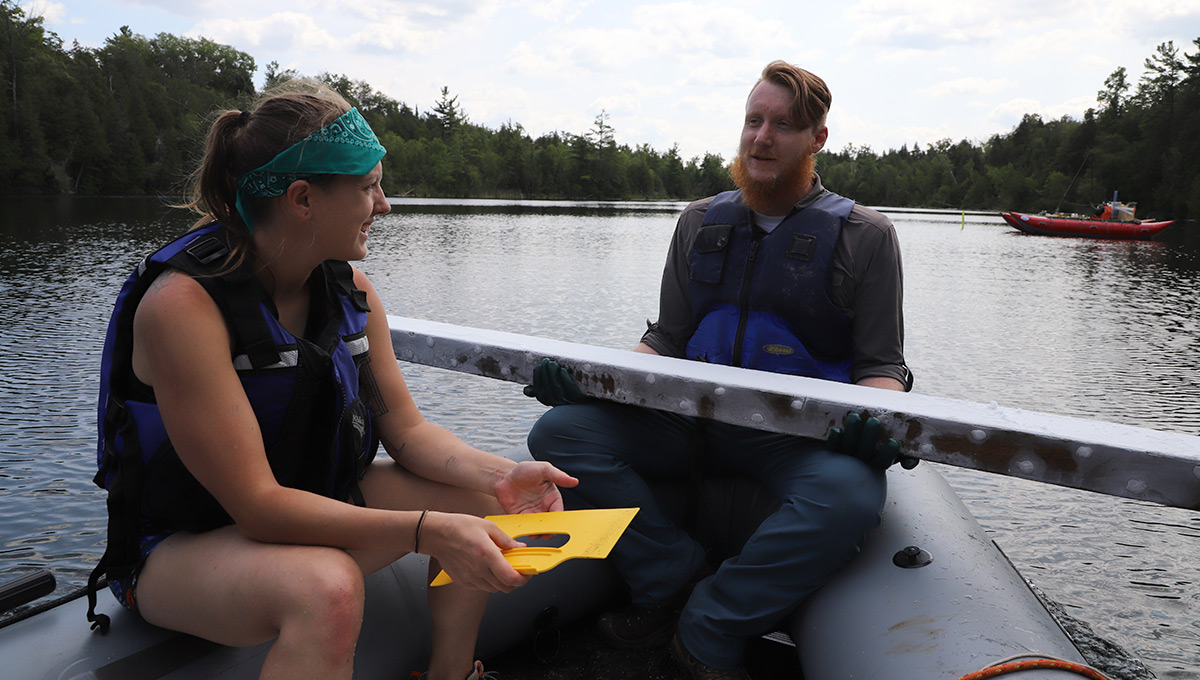 The lakebed strata, which are at most a couple of millimetres thick per year, provide a treasure trove of information about airborne substances in the local area and further afield. For example, fly ash is abundant in the wake of World War II — in part, says Patterson, from steel plant smokestacks in nearby Hamilton.

A novel photography technique that Patterson and his students have developed allows them to zoom in on these annual layers, which they can associate with specific calendar years. They can do other types of high-resolution analysis as well and only need to rely on an off-campus labs for the plutonium and fly ash testing, which is being done in the U.K. for all of the golden spike candidates.

Back in Ottawa, the Canadian Museum of Nature is preparing to archive the Crawford Lake freeze cores in its cryo storage facility. Regardless of whether they are evidence of the official start of the Anthropocene, they will help tell the story of Earth’s past — and future. 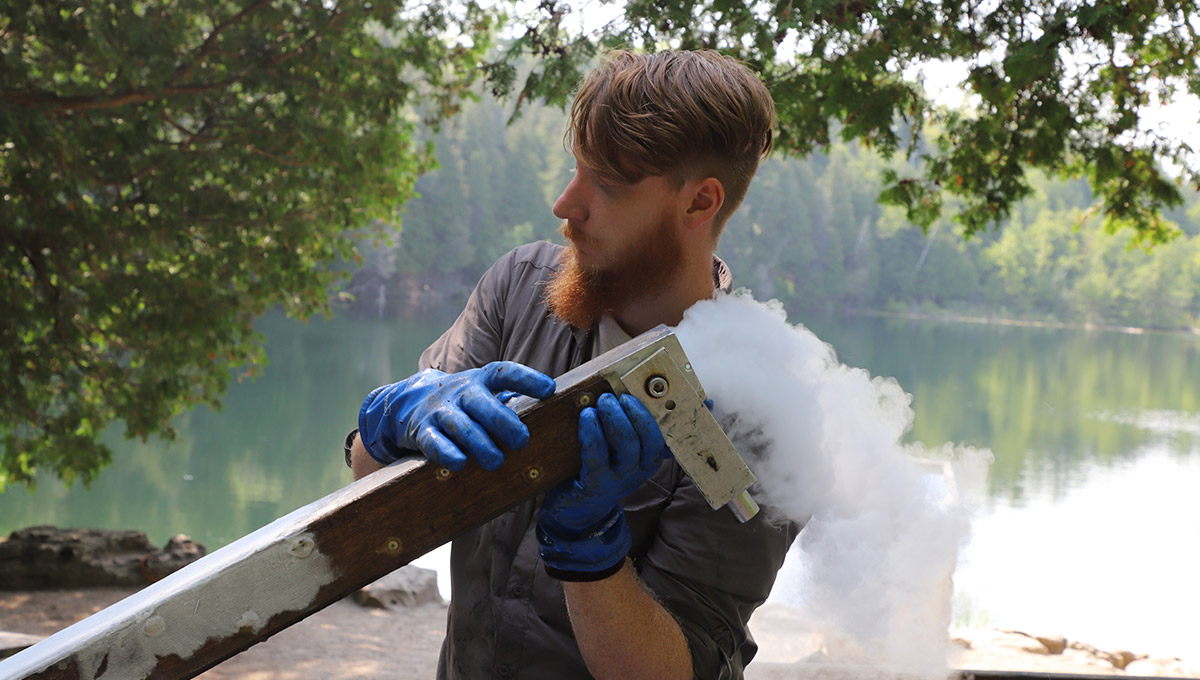 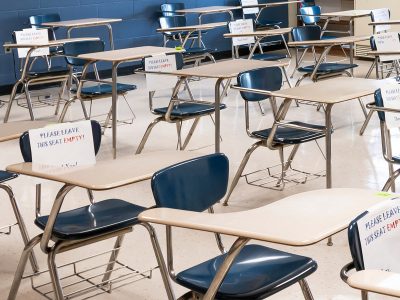 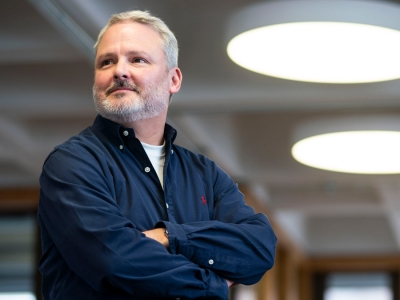 “I was basically told that I was unteachable,’ says Sean Meagher. “But I like learning – and I like the chance to prove myself.” Through the Discovery University program, Meagher has had the opportunity to... More 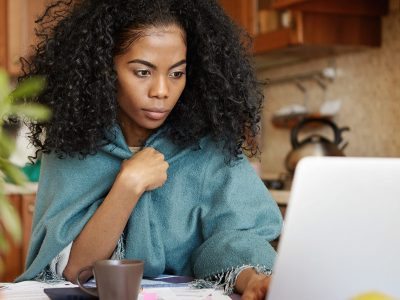 The shutdown of non-essential services to control the spread of COVID-19 has had severe economic consequences in Canada, including the loss of nearly two million jobs in April. As economists, we are analyzing the effects... More 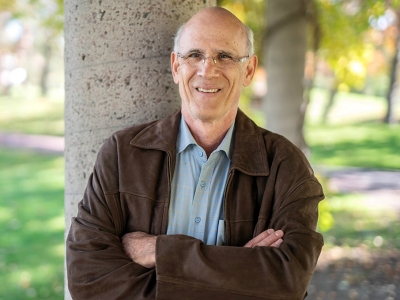 When Michael Wernick retired as Clerk of the Privy Council in spring 2019 after nearly 40 years in the federal bureaucracy, including three as Canada’s top public servant, he could have written a memoir about his experiences... More