Although their journalism can give voice to the voiceless, foreign correspondents often suffer their own afflictions in silence. As she gave the 21st annual Kesterton Lecture on March 11, 2020, award-winning journalist Sheila MacVicar made a strong case for people in her profession to seek help for post-traumatic stress disorder (PTSD).

“I debated talking specifically about my own PTSD,” she said. “But I think that this is a forum in which to speak openly, and if I’m advocating for greater openness it in fact becomes necessary.”

After years of covering conflict and catastrophe around the world for ABC, CNN, CBS, CBC and Al Jazeera, MacVicar began to feel anxious and depressed. She had recurring nightmares and she became a nervous flyer.

“I’m still not really comfortable with fireworks displays,” she said. “I hate anything that sounds like gunfire.” According to a 2018 retrospective study over 18 years by psychiatrist Anthony Feinstein, the long-term rate of full-on PTSD in war reporters approached that of combat veterans.

MacVicar never talked about these problems because of a mixture of fear, stigma and shame. She urged to a room full of colleagues and journalism students to fight those pressures and speak out.

“If you need help, do not be afraid to seek it. It is not weakness to acknowledge you need another tool in your toolbox.” 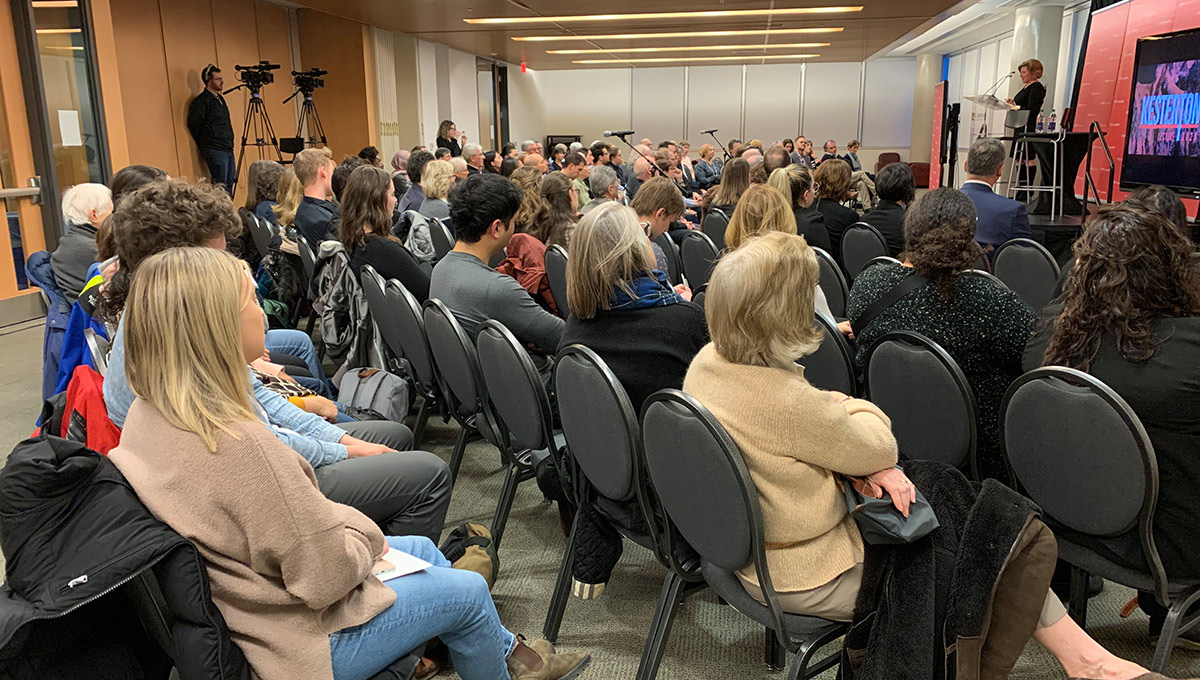 Named after Wilfred Kesterton, a media law and journalism history expert, the annual lecture celebrates journalism education and excellence in Canada. The event is also part of the FPA Research Series, which highlights what the Faculty of Public Affairs does to address regional and global challenges. Susan Harada, interim director of the School of Journalism and Communication and the program head of journalism, noted that Kesterton played a key role in establishing the school.

“This lecture series pays tribute to Kesterton by bringing in people like Sheila MacVicar who can speak to the role of journalism in societies today.” 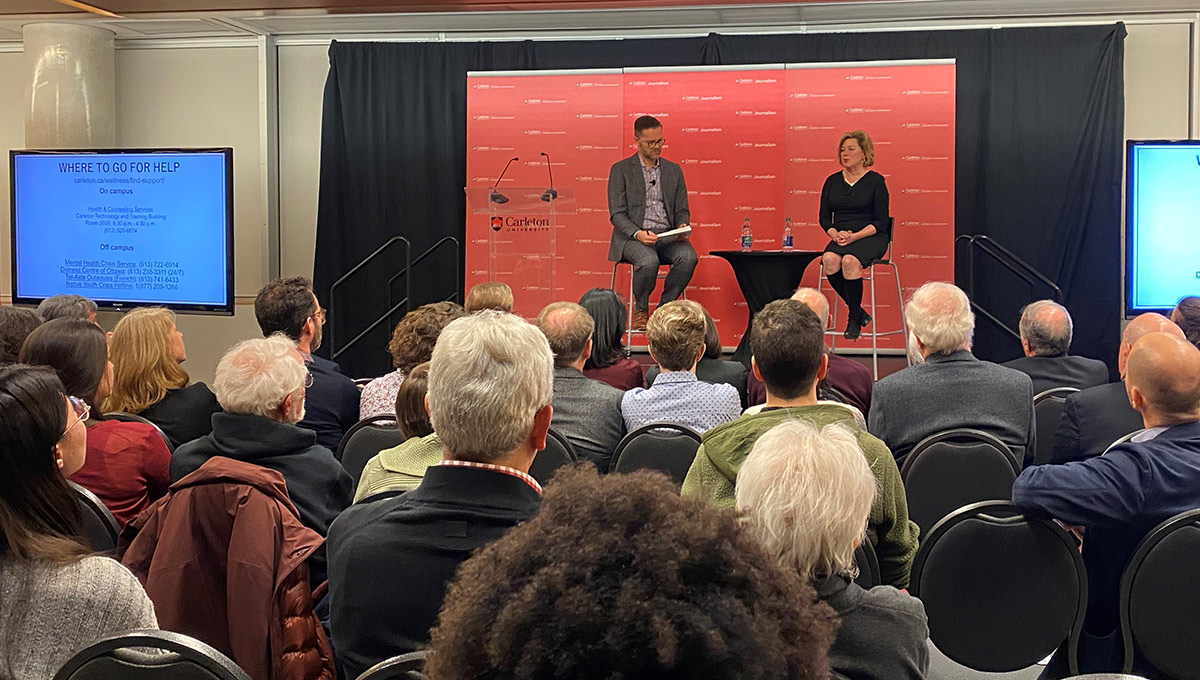 As a budding journalist, MacVicar (BJ/77) was inspired by celebrated CBC foreign correspondent Joe Schlesinger. Schlesinger covered many conflicts over 20 years, including the Vietnam War, the Iranian revolution, and the fall of the Berlin Wall. MacVicar remembered him regularly broadcasting his reports wearing a white trench coat.

When MacVicar became the first full-time female foreign correspondent at the CBC in the late 1980s, the profession was beginning to change.

“Far from that chic, white, globetrotting trench coat I envisaged,” she said, “most of my foreign corresponding involved a sturdy pair of boots, a 10-plus kilo flak jacket permanently parked in my front hall, an extremely unflattering helmet, and most often an armoured car.”

She described her 1992 arrival in Sarajevo: After a corkscrew descent to the airport in a C130 Hercules, she and her ABC news crew were instructed to run off the still-moving plane as it angled to take off immediately. They sped through sniper’s alley—a three-kilometre firing range for the Bosnian Serbs who besieged the city.

That night, MacVicar and her crew slept wearing flak jackets in the brutal Television Building. They eventually set up in the Sarajevo Holiday Inn, a warzone HQ for international reporters. The ideal stay was in a room where the windows had already been shot out, so guests no longer had to worry about glass shrapnel.

Despite working in dire circumstances throughout her career, MacVicar said she was always aware of her privilege. She was there to bear witness and report back, but she was not trapped the way local civilians were.

“Whatever I saw or witnessed, whatever horror or trauma I carried with me, those were very little compared to [what] the people lived through in those terrible points in their lives.” 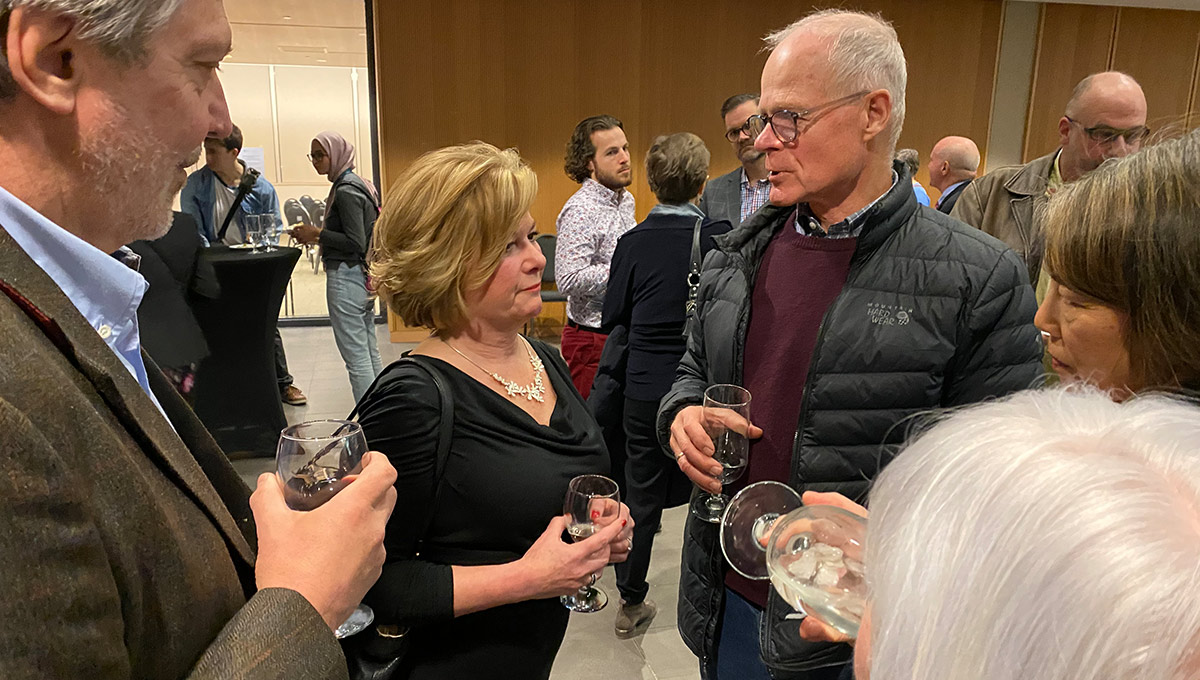 PTSD: Experiences All Add Up

Even so, the things she saw, heard and felt in the Balkans, in Rwanda, and in numerous other conflicts began to take a toll.

“It adds up,” said MacVicar.

PTSD is a response to actual or threatened injury, be it physical, emotional or psychological. What was known as “shell shock” during the First World War was reclassified as “post-traumatic stress disorder” by the American Psychiatric Association in 1980. The new term came with a better understanding of how trauma impacts the human psyche. 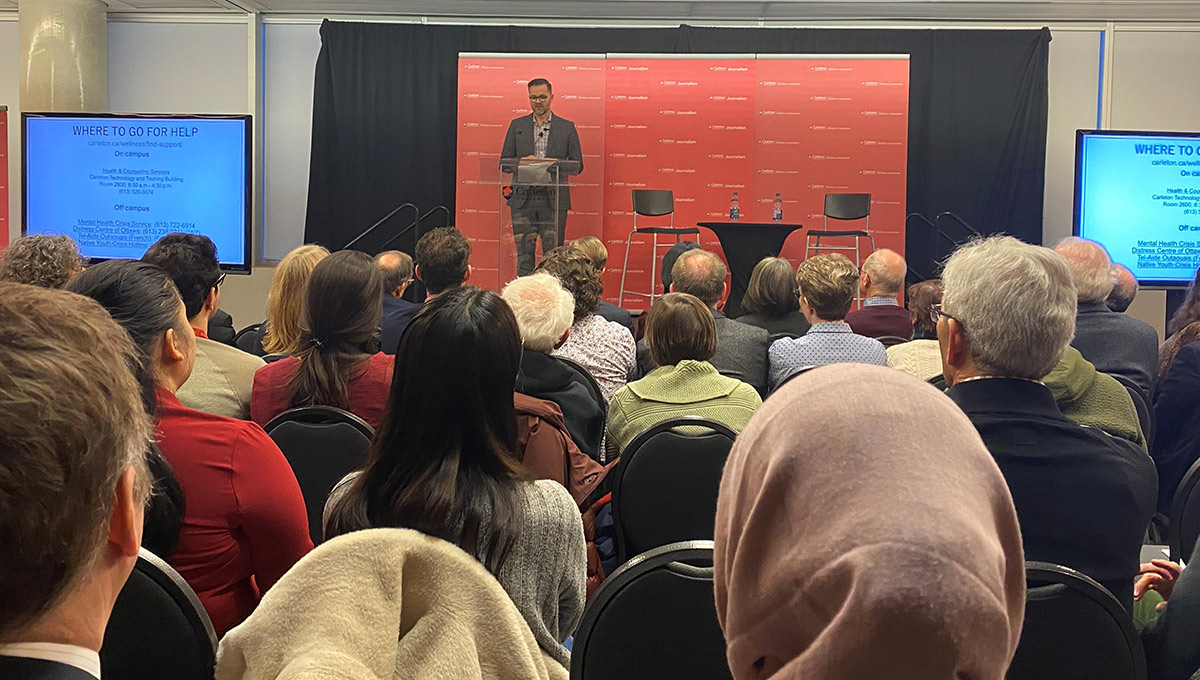 MacVicar’s lecture was followed by a Q&A moderated by Matthew Pearson, a Carleton master’s of journalism graduate who is a reporter and associate producer for CBC. Inspired and affected by the 2013 OC Transpo and VIA Rail collision, Pearson wanted to help journalists better understand trauma and report traumatic news stories responsibly. Thanks to a Michener-Deacon Fellowship for Journalism Education he received in 2017, he researched and created “trauma-informed journalism” modules. These instruct and help both journalists and newsrooms to better support colleagues suffering from trauma.

“As journalists, it falls on us to not look away,” said Pearson. “How do we tell the story in a way that does justice to the person or people at the centre, and to our own mental and physical health?”

Both Pearson and MacVicar emphasized the need for support from the organizations that send correspondents, producers and photographers to the front-lines.

“We need to work with employers to build on the work of those who have pioneered mental health care and journalism workplaces,” said MacVicar. “We need to include freelancers and local hires, and that includes drivers and translators who are too often left out of the equation. We need more capacity and resources.”

When asked how she had motivated herself to get back into the field, MacVicar said she was part of a group of conflict reporters who were compelled to bear witness.

“It’s my job. It’s what I do. It’s the notion that I may be able to make a difference.” 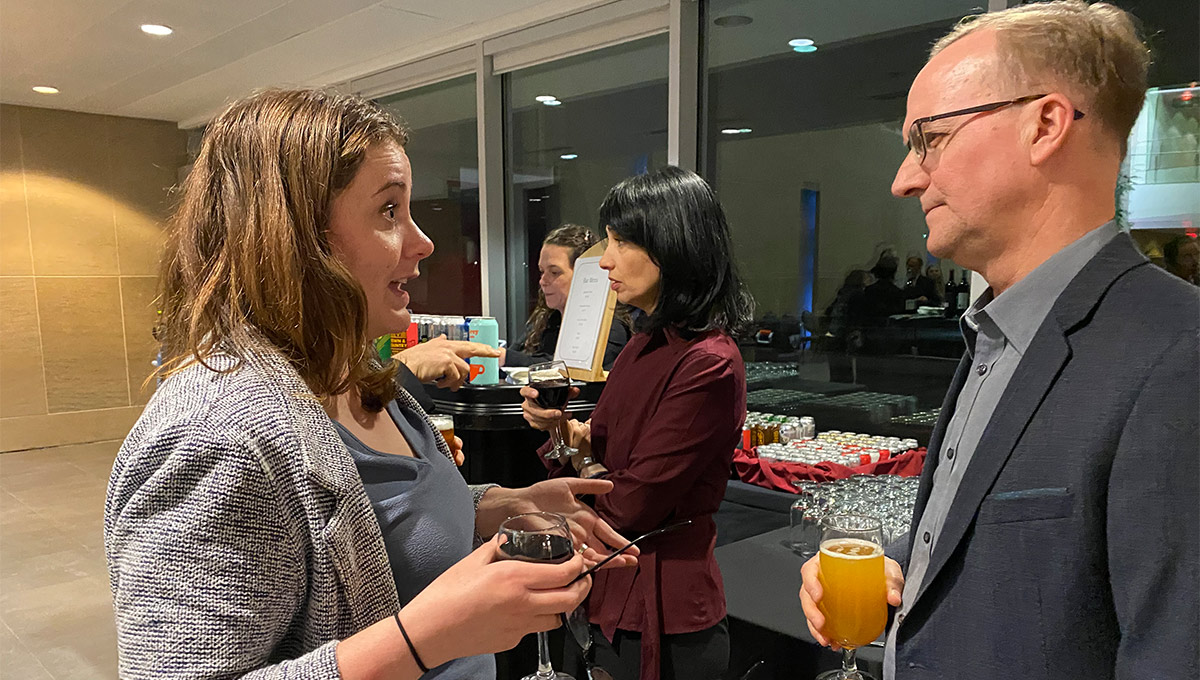 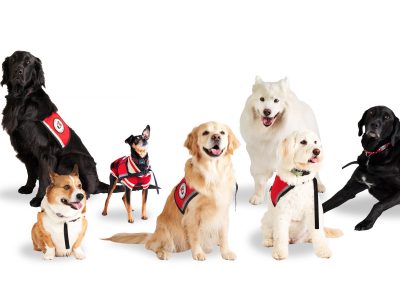 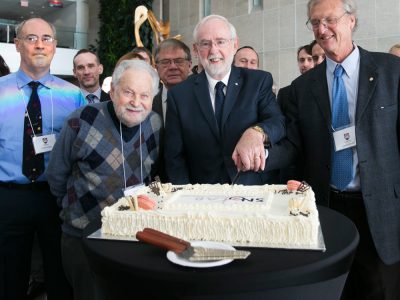 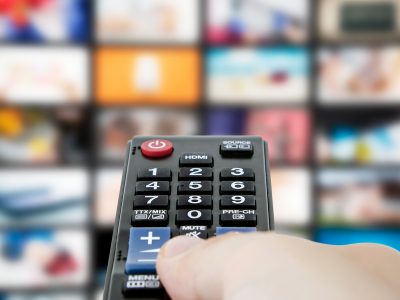 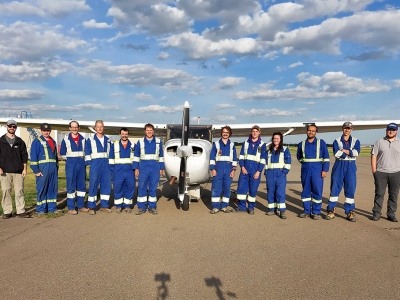