On average, about 11 people die every day in Canada because of opioids, mostly the result of accidental overdoses.

It is a devastating health crisis and a complex social issue where the entwined challenges are magnified by the stigma around substance abuse.

“For so many years, I experienced this stigma,” Charlotte Smith, a Sociology master’s student at Carleton University, told a March 21, 2019 panel discussion intended to raise awareness about the impacts of stigma, why words matter, and the powerful role the media play in shaping perceptions. 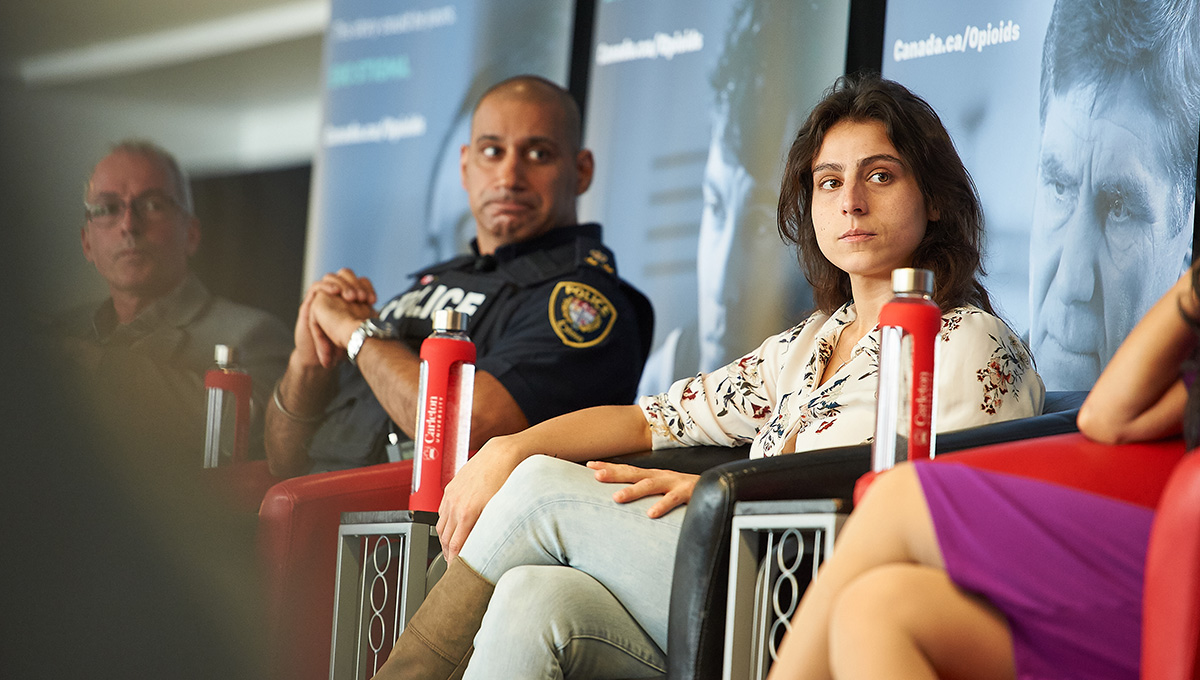 “The words that you hear, from crackhead to crack whore, become how you start to see yourself,” said Smith, telling a room full of Journalism and Health Sciences students that she started using pills at her alternative high school — “a school for ‘druggies’ and ‘dropouts,’ where every student was dealing with trauma” — and wasn’t steered toward treatment as her struggle with drugs deepened. “‘Addict’ is probably the nicest thing I’ve been called.”

When she was 20, smoking crack and selling herself to anybody who would give her a place to sleep for the night, she was allowed to walk out of a hospital covered in dried blood after a suicide attempt, without even being given any food or a bus ticket, let alone being sent to psychological counselling.

Initially, said Smith, police saw her “as a good girl who was in the wrong crowd, as somebody who just needed help” — until she started to look like the stereotypical image of somebody who uses drugs.

At that point, whenever she had a run-in with the law, she was told: “You’ll be back.”

People who are addicted to drugs or alcohol almost always face “a constellation of issues,” said Smith. “Users don’t just need clean needles, but access to housing and mental health support. What people need most is opportunity.” 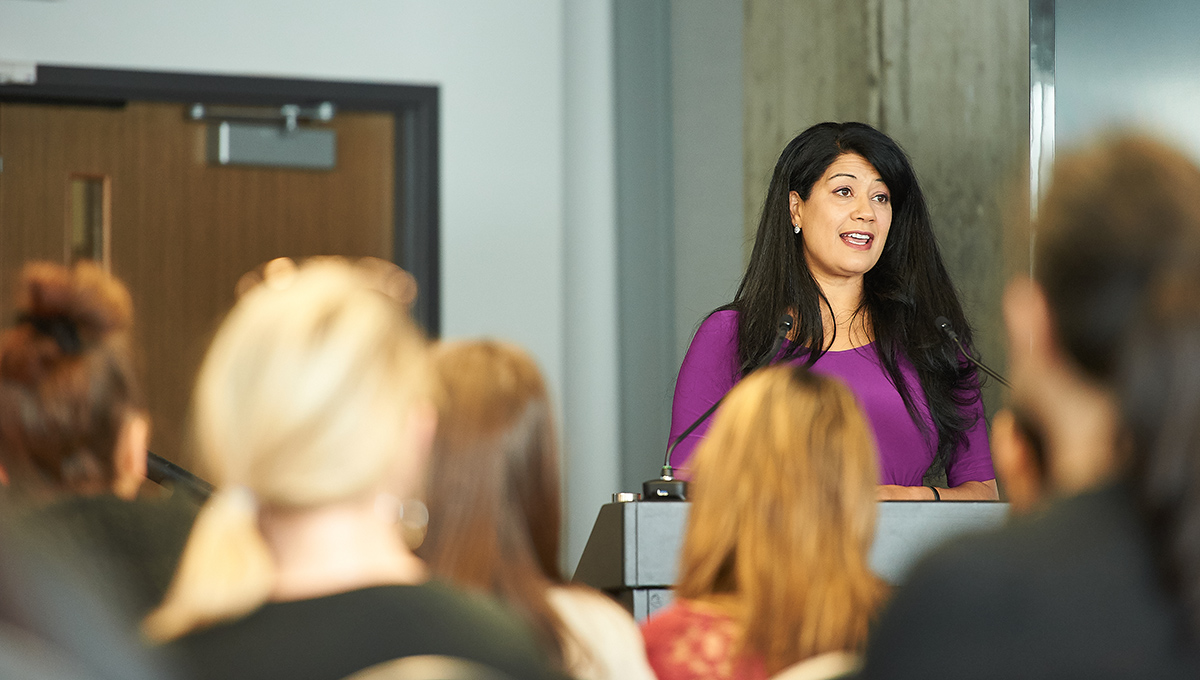 Framing the Opioid Crisis as a Public Health Crisis

Supriya Sharma, the senior medical advisor to the deputy minister of Health Canada, defined stigma as “a complex construct that gets in the way of framing the opioid crisis as a public health crisis.

“Because of stigma, people are dying, and they’re dying alone,” said Sharma, who delivered opening remarks and spoke at the panel on behalf of Health Minister Ginette Petitpas Taylor.

Stigma, said Sharma, means that in western Canada, where naloxone kits are available to counter opioid overdoes, the life-saving medicine is often simply not picked up. It means that parents don’t take time off work to help their children get treatment because they’re too ashamed to tell their employers and colleagues. 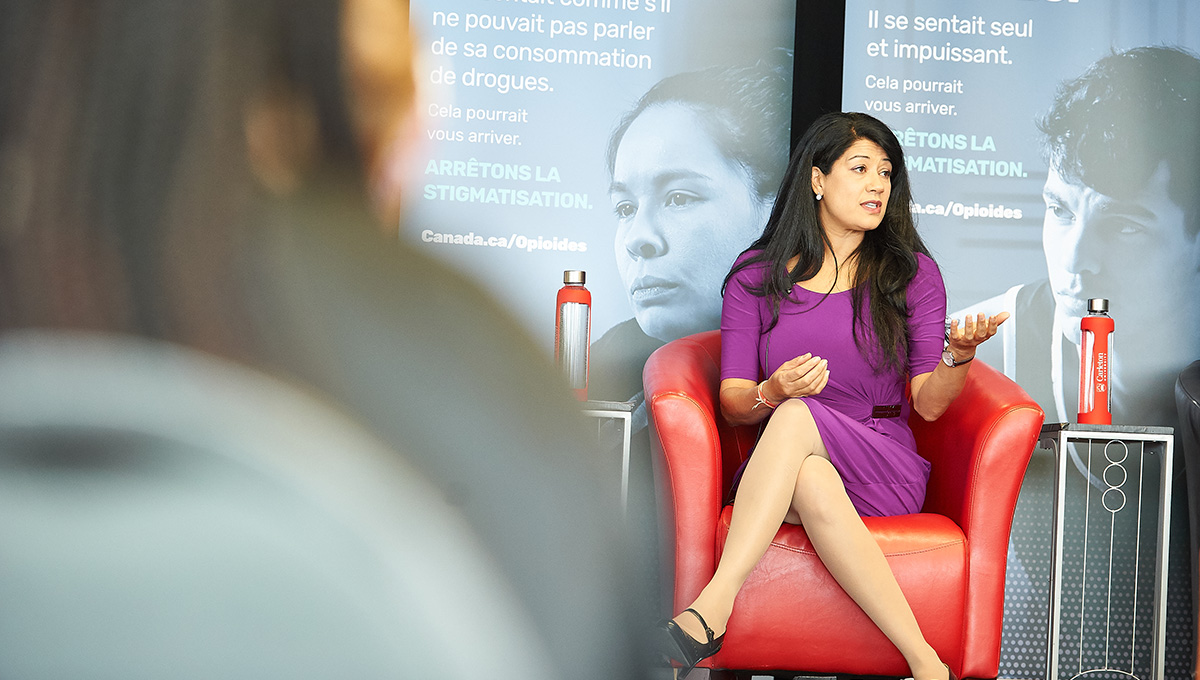 A tumor is treated like an illness, said Sharma. Addiction is not.

The panel was introduced by Carleton President Benoit-Antoine Bacon, who said that “stigma often prevents people from getting the help that they need” and praised the federal government’s timely anti-stigma campaign, which targets the language people use.

At the beginning of the event, when Sharma asked for a show of hands from attendees who knew somebody who has suffered from substance abuse, every hand in the room went up.

As with mental health issues, public education is an important step toward reducing stigma, said Sharma, as is interpersonal contact — so we start to see people who are sick not as “the other,” but as our relatives, friends, colleagues and neighbours. 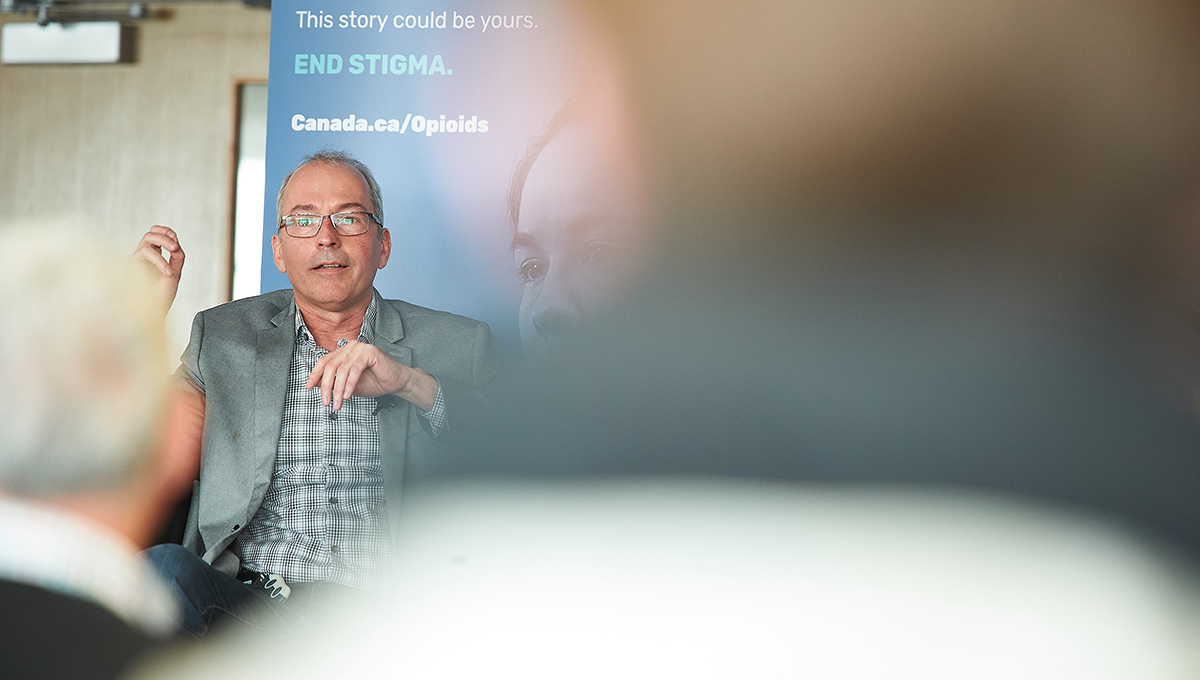 Creating an Environment Where Community Can be Built

At the Sandy Hill Community Centre — where Carleton Chemistry Prof. Jeff Smith is part of a research project using mass spectrometry to test drug samples before clients use — Boyd and his colleagues work with people who inject drugs or smoke crack in a health-care environment, without judgment or stigma.

“My program is set up because there’s a recognition that within health care and social services, stigma is problematic and people can’t get help,” he said.

“It’s a place where people can talk about issues or concerns that are important to them and get real practical help to get through the day. That might be access to a pipe or a needle, or access to a space where there’s a nurse present.

“Really, it’s a mental health drop-in, where people can avoid the ongoing heavy oppression of stigma, with no expectation that they have to do anything in exchange for that.” 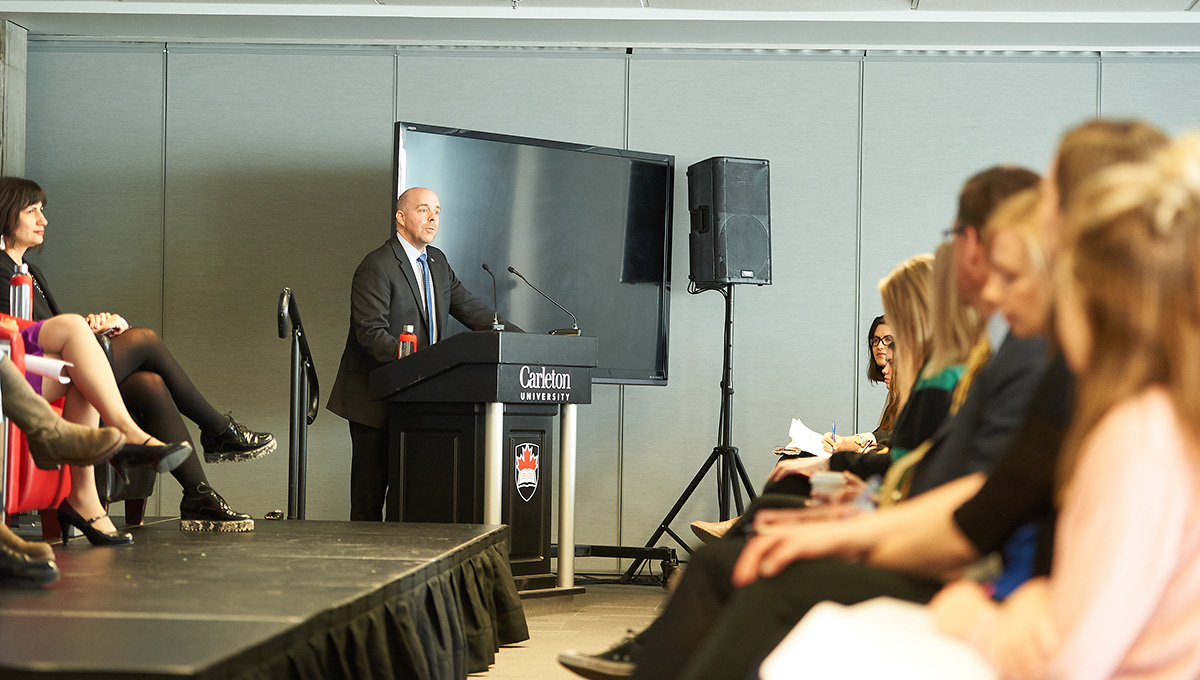 Client feedback at the centre indicates they believe that staff “know who we are . . . and love us anyway,” said Boyd, who quoted from Chasing the Scream, a book about the war on drugs, and said that “the opposite of addiction is connection.

“We’re trying to create an environment where community can be built,” he added.

“In my opinion, a safe injection site is providing treatment, because we’re trying to change people’s relationships with their substances. People will start using fewer substances when their social needs are met.”

Which echoes one of Smith’s comments from the panel: “When you use drugs, you’re always alone. Because we’re all struggling, it’s very hard to help one another.” 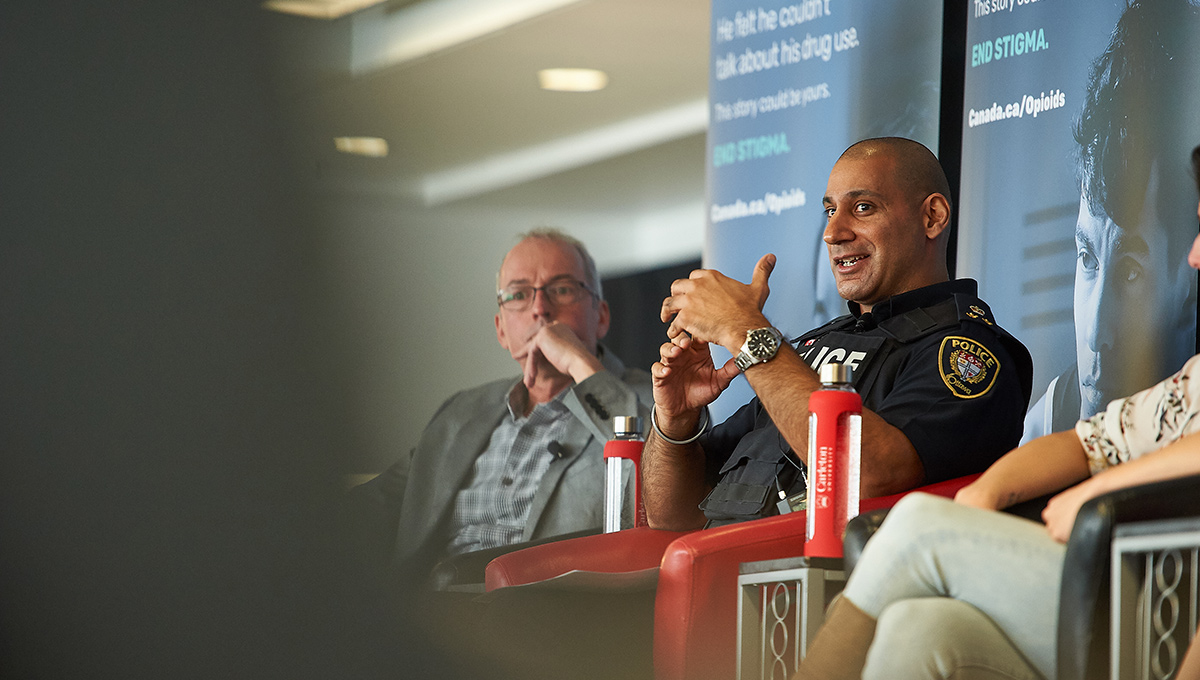 Treating Substance Abuse as a Health Challenge, Not a Policing Issue

Jaswal noted that the prevalence of substance abuse among police officers and other first responders ranges from 20 to 30 per cent, compared to about 10 per cent for the general population.

“When you develop a problem that becomes an issue for yourself, it becomes very difficult to help others with the same problems,” he said, adding that police departments need to change how their members are taught about the roles they can play toward improving community safety as part of a broader societal shift toward treating substance abuse as a health challenge, not a policing issue.

“We interact with people from across our community,” said Jaswal. “I grew up in a home where we viewed substance abuse as a personal failure. When I take that framework, and look at human nature, we hate or dislike the things that we fear. When we encounter people who remind us of this challenge, we can treat them poorly or with indifference.” 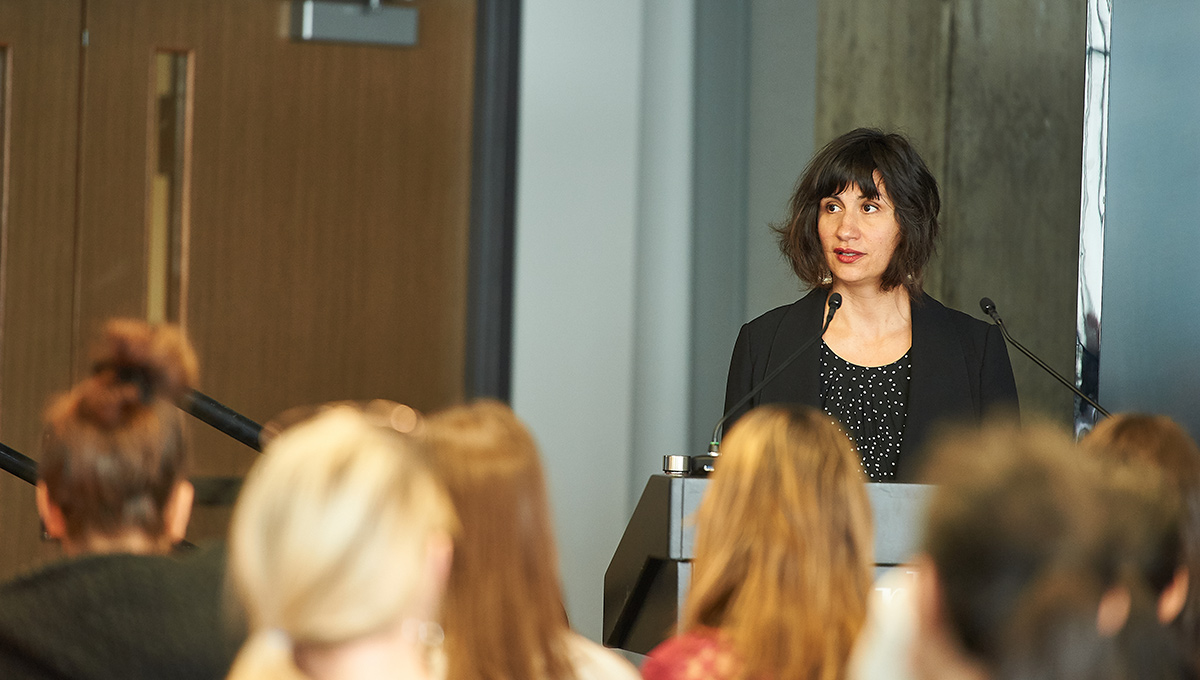 Taking off her moderator’s hat and stepping into her role as a science journalism professor, Everts talked about what media — including young journalists in the room — can do to help reduce stigma.

Reporters can make it an “intentional practice to stop using stigmatizing words,” she said, going on to offer a three-step approach to more sensitive storytelling.

First, when choosing who to interview, talk to people who have first-hand knowledge of opioids. “To the journalism students in the audience, don’t just talk to doctors,” said Everts.

Second, do a better job framing stories about drugs. Before sending a story to your editor, consider another chronic condition, such as diabetes or heart disease, and replace the term “drug use.” Would the story still stand?

In other words, don’t just write about the people who are being hurt. Look at the system — such as the role of medical schools, health regulators and doctors being lobbied to prescribe OxyContin — that led to the problem. 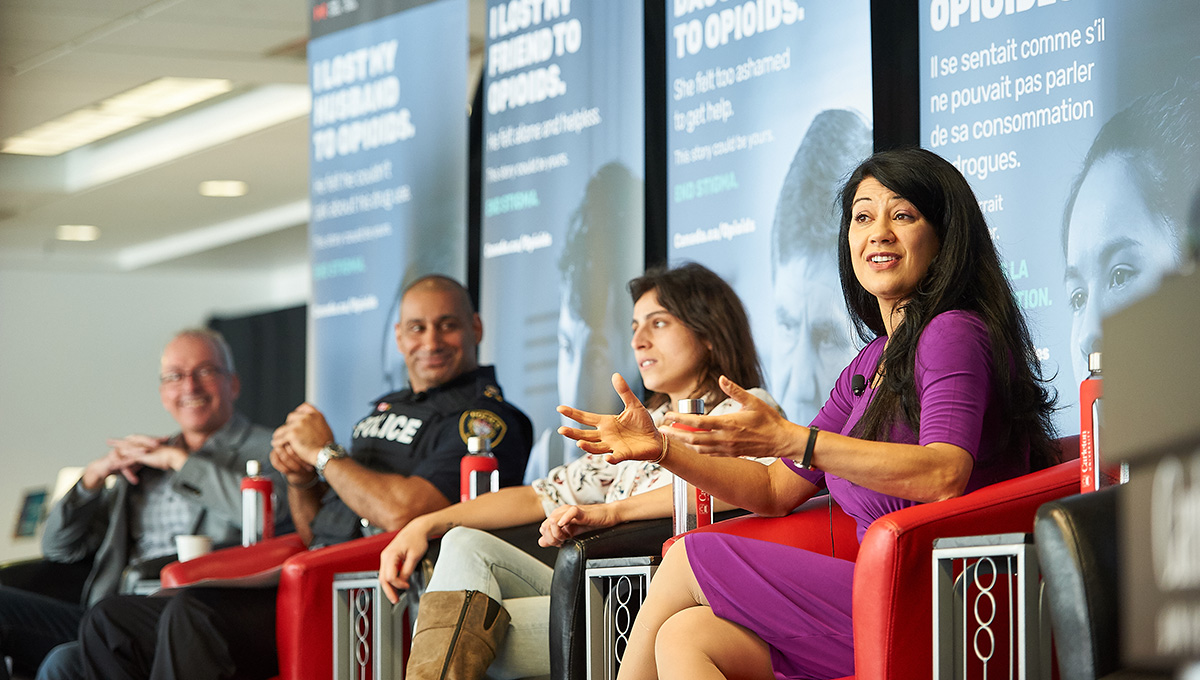 Stop repeating “moral panic” stories, such as cases of fentanyl being absorbed through skin, which is not possible. Journalists have a responsibility to not perpetuate stories about non-existent risks, he said, and to really question things. 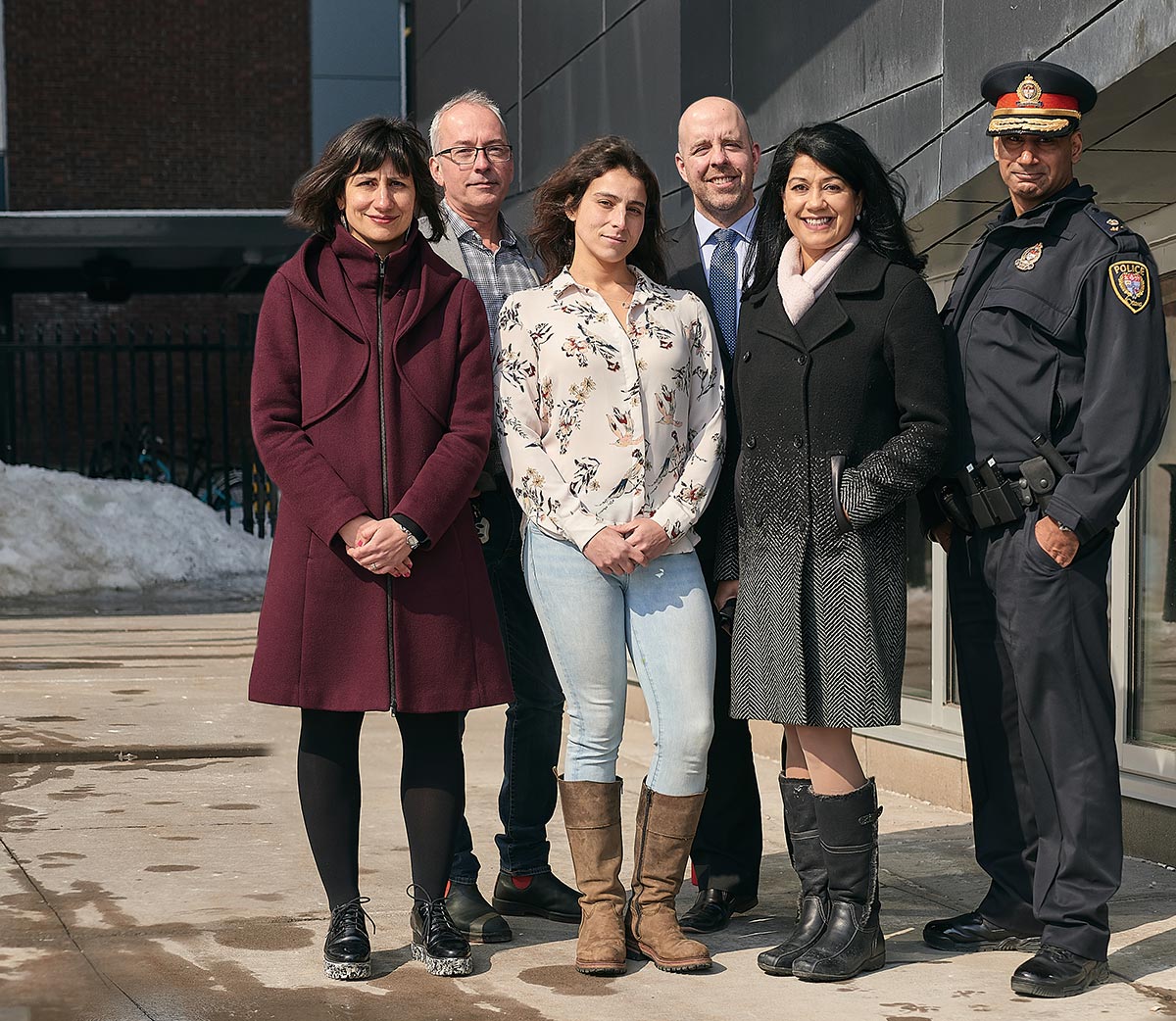 Beyond stigma, the number one barrier that prevents people from seeking treatment, he said, is that they don’t want to stop using.

“We need to separate abstinence from recovery,” said Boyd.

“People might have a recovery goal that is really just managed use. We have to be really cautious about pushing people into a conventional notion of what rehab is.”

During a question-and-answer session at the end of the panel, Scott Hannant — a Carleton Journalism instructor and interim director of public affairs and communications at the Canadian Centre on Substance Use and Addiction — stood in the audience and made one of the most resonant comments of the morning.

“You wouldn’t call somebody a food abuser,” he said, “if they had an eating disorder.” 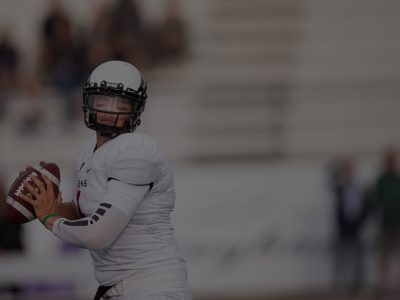 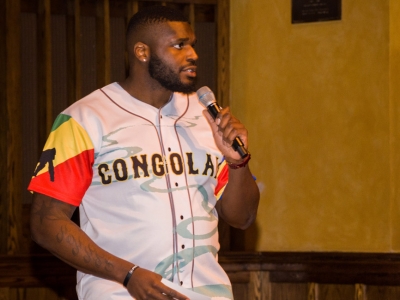 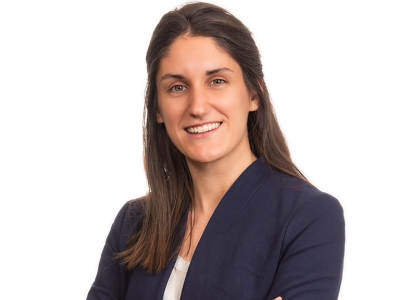 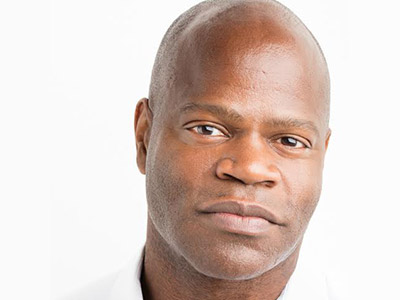 In March, Carleton University welcomed Michael F. Charles when he began his appointment as University Advisor on Equity and Director of Equity Services. Since then, Charles has quickly immersed himself in a number of university... More