In the early 1990s, when the conversations that led to the creation of the Arctic Council were reaching a crescendo, the role of Indigenous people was a subject of intense discussion.

“That was a new concept,” recalled Mary Simon, the Minister of Indigenous and Northern Affairs’ special representative on Arctic issues, and one of Canada’s lead negotiators in the talks that begat the Arctic Council. “‘Observer status’ was the level of participation that Indigenous peoples typically had.” 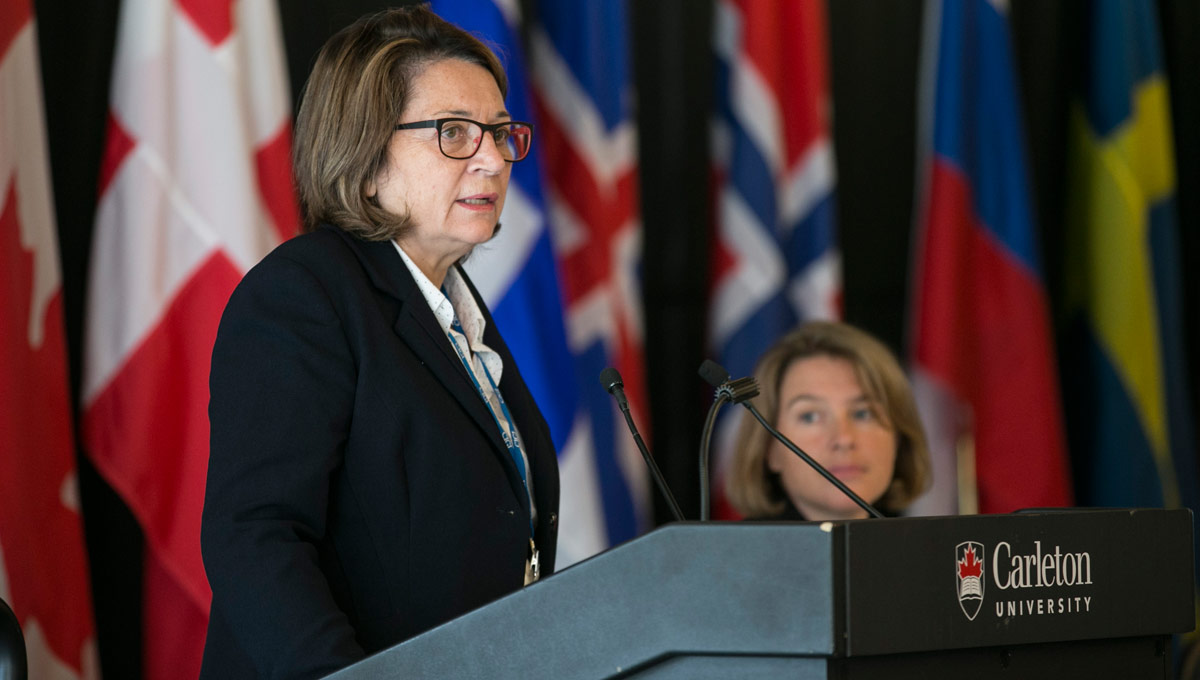 Simon, an Inuk who was Canada’s inaugural Ambassador for Circumpolar Affairs from 1994 to 2003, was speaking during a day-long conference at Carleton on Sept. 29 marking the 20th anniversary of the founding of the Arctic Council.

The council, which was formally established by a declaration in Ottawa in 1996, is an intergovernmental forum that promotes cooperation, coordination and interaction among Arctic nations, Indigenous communities and other residents of the region on issues such as sustainable development and environmental protection.

Its member states are Canada, Denmark, Finland, Iceland, Norway, Sweden, Russia and the United States, and the other three permanent participants are the Aleut International Association, the Saami Council and the Russian Association of Indigenous Peoples of the North. 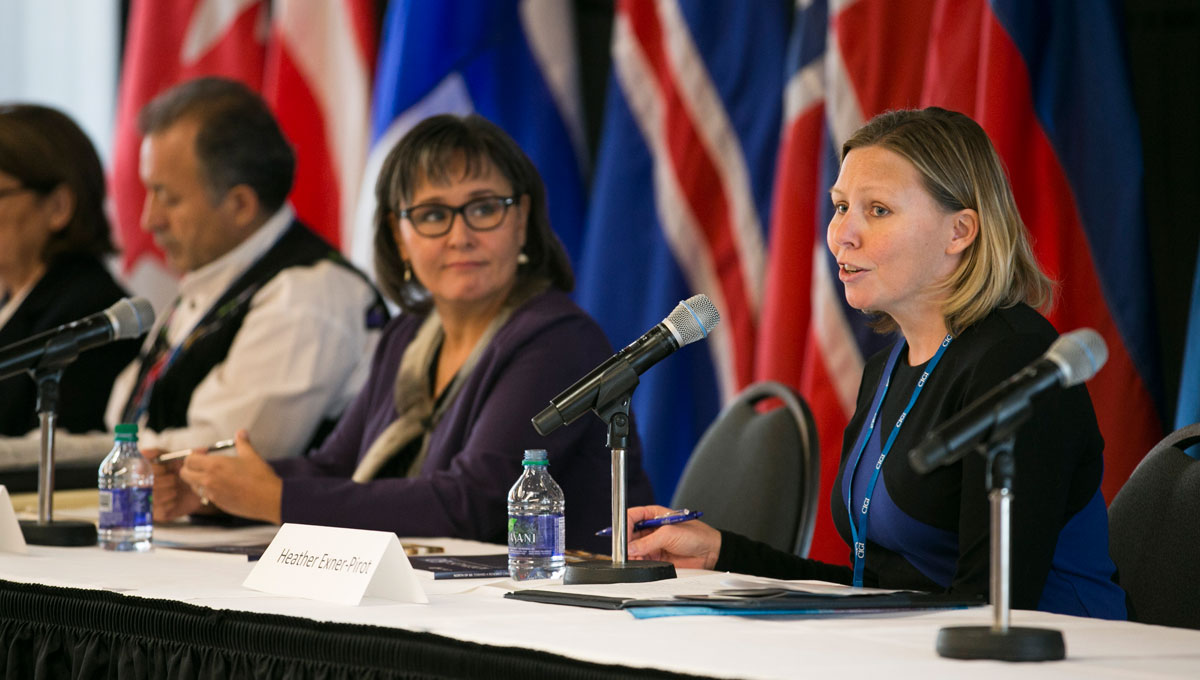 Simon praised the council as “a model of regional sustainable development governance,” noting that while ideas such as the need to incorporate traditional knowledge into scientific research are widely accepted today, that wasn’t the case 25 years ago.

“Arctic residents — including Indigenous peoples — are now much better equipped to participate forcefully in important discussions about the environment, development and culture,” she said.

The opening address at the conference, which was co-hosted by Carleton and the Waterloo-based Centre for International Governance Innovation (CIGI), was delivered by Pamela Goldsmith-Jones, a Liberal MP from British Columbia and the parliamentary secretary to Foreign Affairs Minister Stéphane Dion.

“The well-being of northern people is being challenged by great shifts,” said Goldsmith-Jones, speaking on behalf of Dion, who was scheduled to open the event but was called away to Israel for the funeral of former President Shimon Peres. 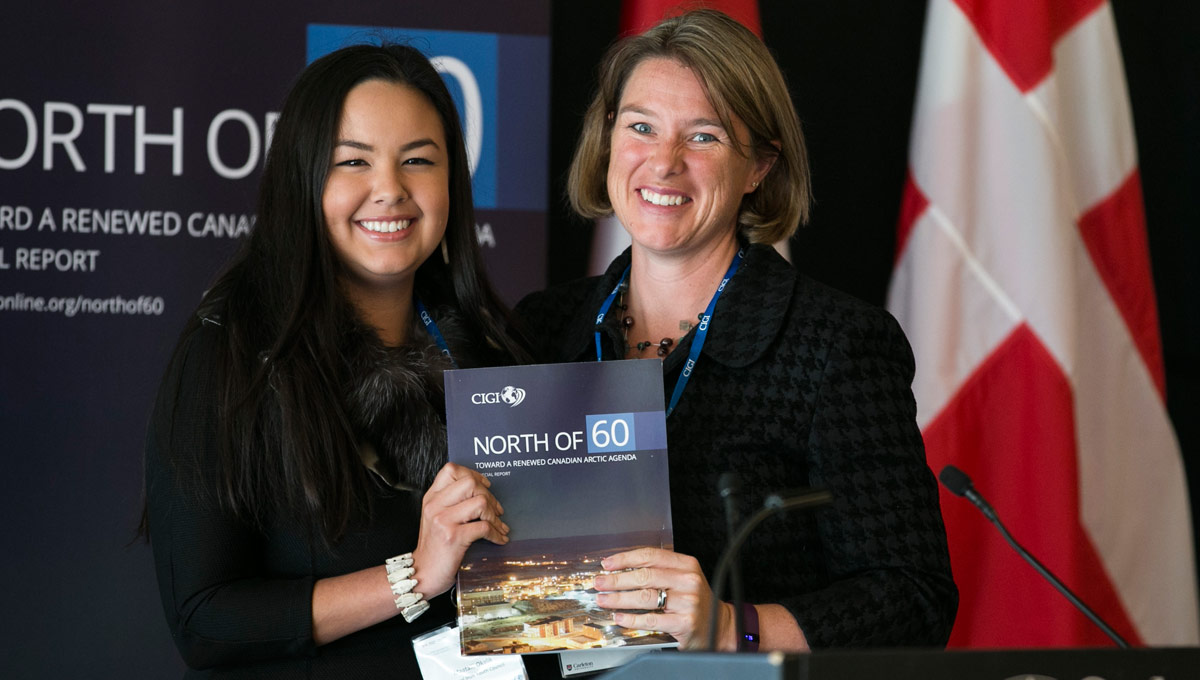 The fragile Arctic ecosystem faces risks from resource extraction and ice-free navigation of its waters, and irresponsible development could spell disaster, said Goldsmith-Jones. Melting permafrost is impacting community infrastructure, and climate change is impacting wildlife populations, which remain an important source of food for many northerners.

“The Arctic Council,” she said, “is a way to create collaboration around our collective responsibility. The world is in better shape because the council exists. Preservation of the Arctic ecosystem is important for the health of the entire planet.”

Not only has the council brought Indigenous people to the table, it has also forged legally binding agreements on Arctic search and rescue and marine oil pollution preparedness, and it has produced studies on topics such as methane emissions, telecommunications, and Indigenous languages and cultures.

Moreover, it’s a forum for dialogue with Russia, which controls about half of all Arctic land and sea (compared to 25 percent for Canada) and isn’t always a willing participant in international decision-making bodies. 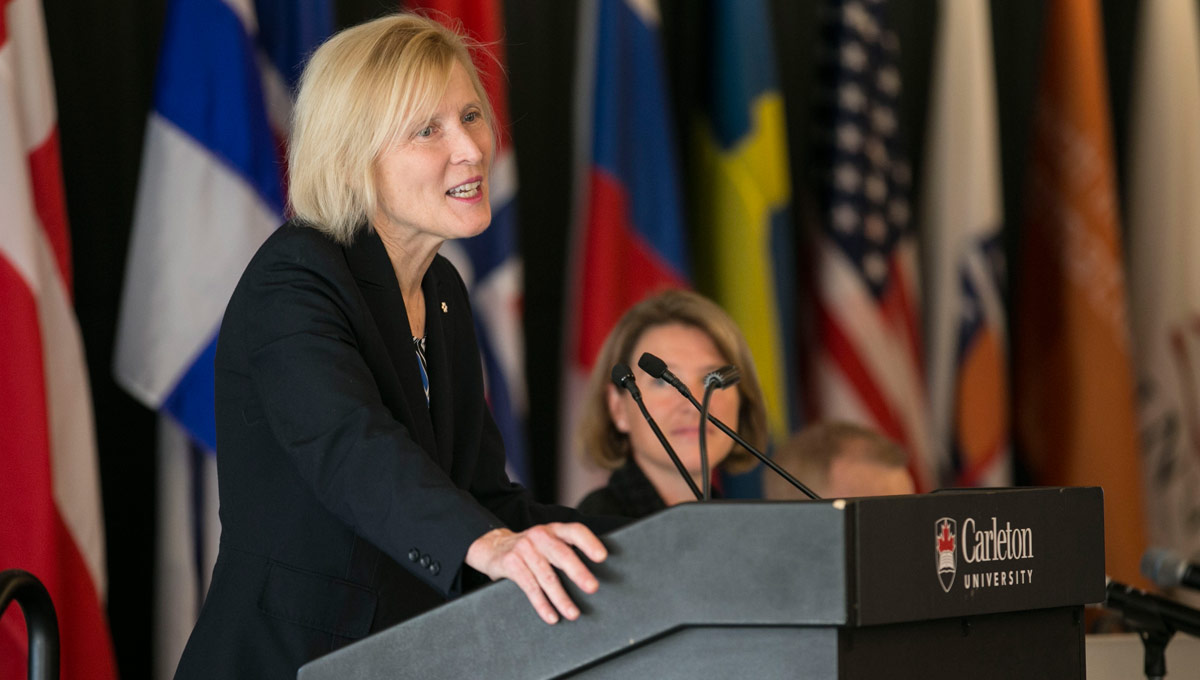 Co-operating with Russia
on Arctic issues

“Co-operation with Russia on the full range of Arctic issues is in our best interest,” said Goldsmith-Jones, who noted that Russia will participate in an Arctic conference at Carleton in November.

Goldsmith-Jones’ speech was followed by remarks from National Inuit Youth Council president Maatalii Okalik, a Carleton student who also works for the Government of Nunavut.

“Inuit youth embrace their traditional identity,” she said, talking about the importance of preserving Indigenous languages and cultures. “We need the appropriate tools to sustain it. Decisions made today will impact our future.”

After Okalik’s talk, Mary Simon and her co-panelists participated in a session reflecting on the creation and accomplishments of the Arctic Council. 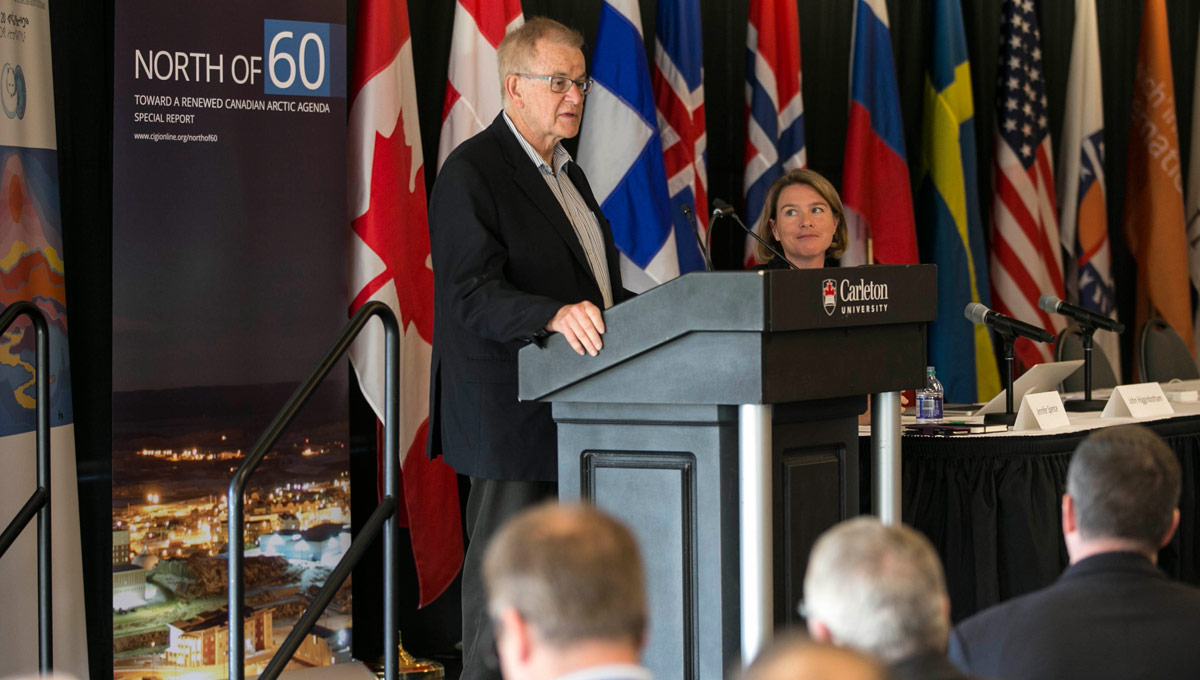 John Higginbotham, a senior distinguished fellow at Carleton’s Norman Paterson<br /> School of International Affairs and head of the Arctic program at CIGI.

Simon was joined by Bill Erasmus, National Chief of the Dene Nation and international chair of the Arctic Athabaskan Council; former Nunavut MP Leona Aglukkaq, who served as Canada’s health and environment minister, and chaired the Arctic Council from 2013 to 2015; and by Heather Exner-Pirot, an outreach and Indigenous engagement strategist at the University of Saskatchewan and managing editor of the influential Arctic Yearbook journal.

“The Arctic Council is the centre of a web, rather than the top of a hierarchical pyramid,” said Exner-Pirot. “It allows a range of organizations to play a role.”

Innovation will be the key to sustainable development in the Arctic over the next couple decades, she added. Remote off-grid communities can benefit from tele-health and distance education initiatives, greenhouses that help improve food security, and locally generated renewable energy.

At the conference — which was held one day after the first-ever White House Arctic Science Ministerial in Washington, D.C., where Canada’s Minister of Science Kirsty Duncan spoke on the importance of leveraging Arctic science to both inspire the next generation of young scientists and encourage young people in Arctic communities to develop science, technology, engineering and math skills — CIGI also released a new report, “North of 60: Toward a Renewed Canadian Arctic Agenda.” 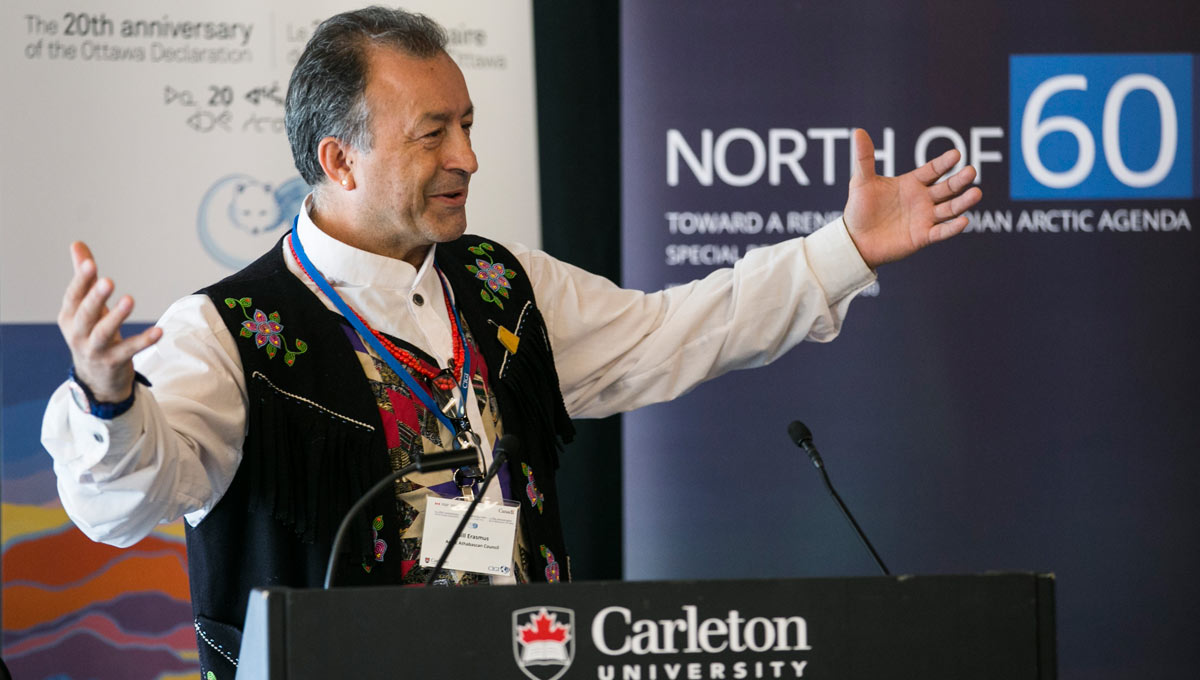 Edited by John Higginbotham, a senior distinguished fellow at Carleton’s Norman Paterson School of International Affairs, and Jennifer Spence, a PhD candidate, instructor and research associate at the university’s School of Public Policy and Administration (SPPA), the collection of essays explores the “complex social, environmental, economic and political” issues at play in the North, and provide direction for Canada’s future Arctic policy.

It features a contribution by SPPA Prof. Frances Abele, who sketches out “a starting point for a new federal approach” to the Arctic that takes into account the North’s “rapidly changing environmental circumstances” and engages Indigenous organizations that have “a realistic understanding of northern conditions.”

Permafrost researcher Chris Burn, the other contributor from Carleton, tackles three immediate impacts of climate change that Canadian governments must contend with: the implications of building and maintaining public infrastructure on thawing permafrost, co-management of these and other environmental effects, and increased tourism in the North.

“We have arrived at a critical moment for Canada’s North,” said Higginbotham.

“With the 20th anniversary of the Arctic Council, a heightened focus on climate change in the Arctic, and a Canadian government willing to confront some of the region’s unique challenges, this special report helps carve out a clear direction for the future of Canadian Arctic policy.”

For close to 50 years, The Norman Paterson School of International Affairs (NPSIA) has been training Canada’s best and brightest graduate students in international affairs. We have well over 2,000 alumni, many of whom have gone on to key leadership positions in the Canadian federal and provincial public service, foreign governments, the United Nations, and the private and not-for-profit sectors. 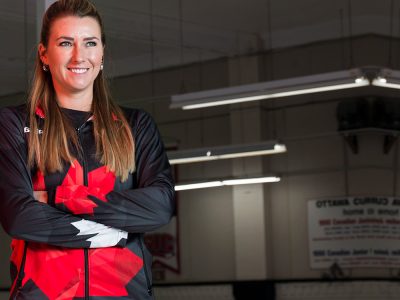 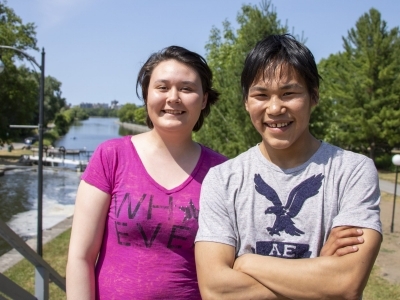 Two Inuit teens from Canada’s Arctic visited Carleton from July 11 to 16 as part of the Imagine Architecture program offered through the university’s Azrieli School of Architecture and Urbanism. The program is a career exploratory initiative geared... More 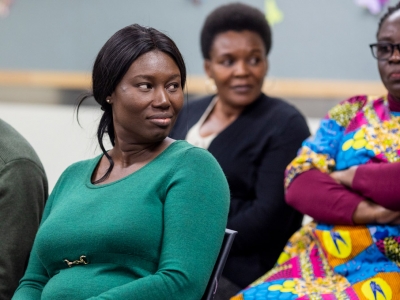