One Grade 9 student said that the presence of police officers made the high school feel safer than other schools. Another said they felt safer while walking home.

“If anything does go bad, they are here,” a Grade 9. “You always feel secure.”

“I can focus on my studying and long-term goals without worrying,” said another, “because I know they are here.”

The students in Peel Region near Toronto were interviewed for a comprehensive report by Carleton University Business Prof. Linda Duxbury and Psychology Prof. Craig Bennell, who were tasked with determining the value of the region’s $9-million School Resource Officer (SRO) program. 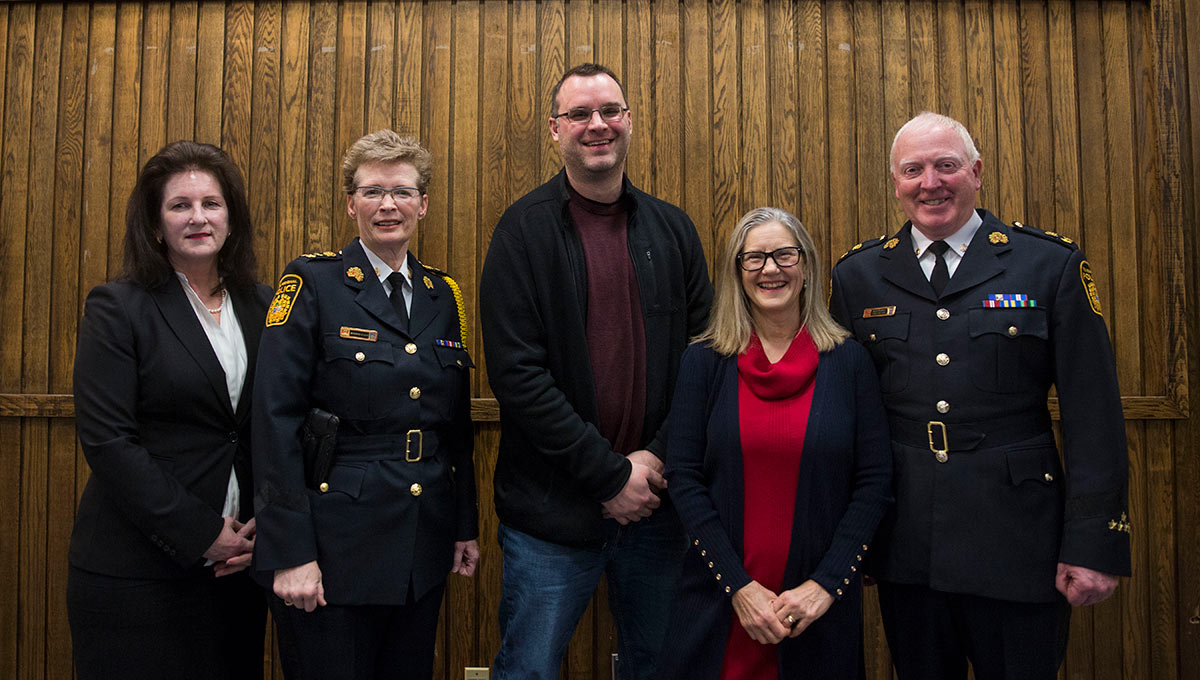 Their extensive two-year study concluded that the SRO program not only reduces crime and bullying but also provides extensive social and economic benefits, estimated at 11 times the annual cost.

Students at the five schools that were studied said they feel less stressed, miss less school, are better able to learn and are mentally healthier. Over time, their fear of being bullied or physically harmed in a school with a SRO decreases, a positive impact that’s particularly pronounced among students who have been victimized in the past.

“Students benefit from this proactive, preventative, relationship-building approach to policing,” Duxbury said during a Jan. 10 news conference at Carleton, where the report was released.

“You evaluate a program based on the goals of the program. The goal of this Peel Region policing initiative is to make students feel safer at school so they can learn better. It’s a resounding success.” 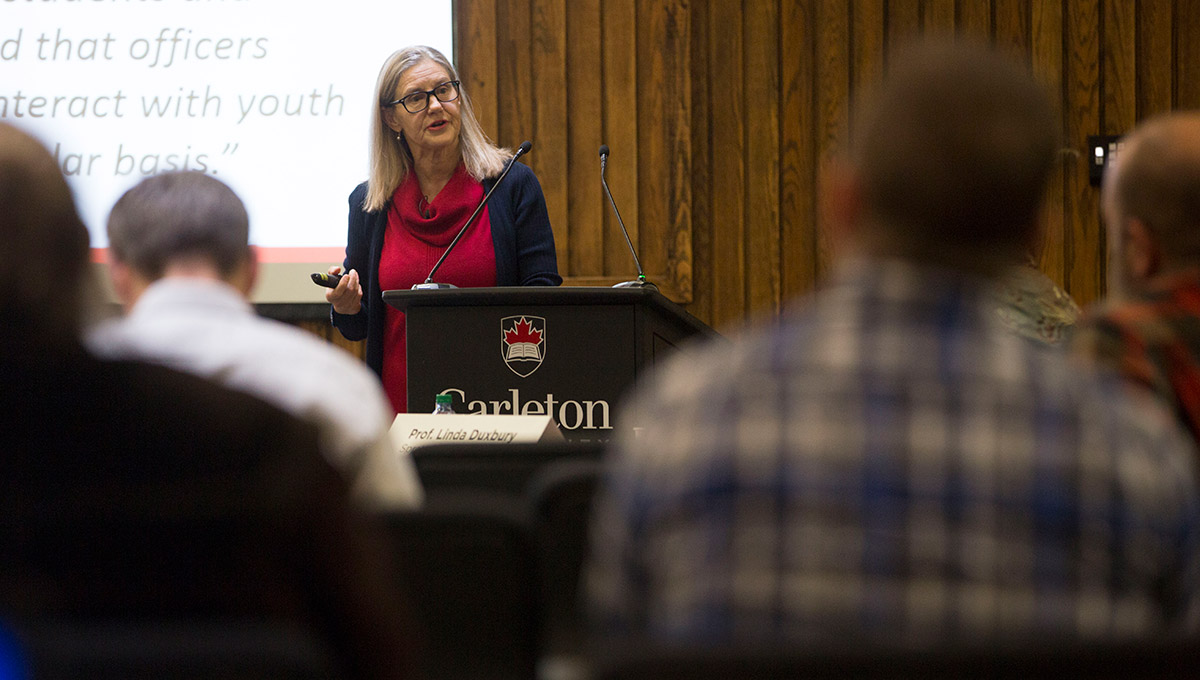 The impetus for Duxbury and Bennell’s report can be traced back more than five years, amid question about the economics of policing, which is a large budget item for municipalities with benefits that are difficult to quantify.

Peel’s SRO program has been in place for 22 years. It is unique in Ontario (and perhaps across Canada) because dedicated officers are assigned to all of the region’s high schools. Other school policing programs are not as extensive.

The researchers interviewed almost 100 SROs, their bosses and school administrators from 2014 through 2017. They also reviewed daily records kept by the SROs working in the five schools and shadowed them during their working hours on 10 occasions.

At schools, officers do both proactive and reactive policing. Examples of their activities include walking areas of the school where students congregate, monitoring social media, participating in extra-curricular sports, and responding to both criminal (drugs, robberies) and non-criminal (trespassing, liquor infractions, fighting, suicide attempts) calls for service at the school and in the school’s catchment area.

The officers act as deterrents and can respond quickly to and de-escalate situations where they are needed. 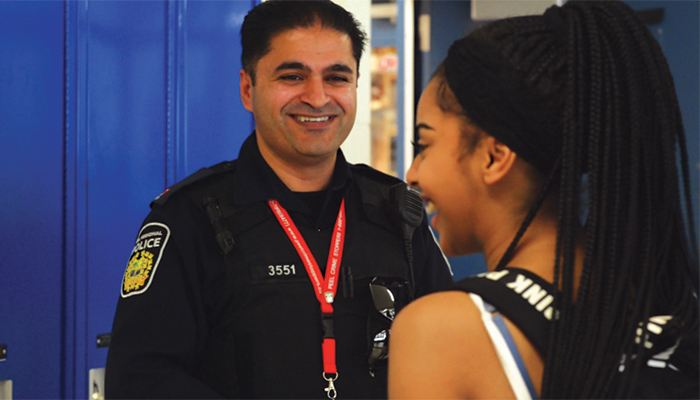 This presence not only reduces incidents of crime and bullying and leads to educational and mental health benefits for students, it also means that school staff spend less time dealing with disciplinary matters and property damage, helps students avoid criminal charges, and helps officers acquire the skills they need to engage with the communities they serve.

“One big challenge is connecting with the kids because there is a lot of negativity about the police on TV,” said one of the SROs interviewed for the report.

“So you kind of try to break that barrier … and show them we’re here for them.”

“This is real policing,” Duxbury said at the news conference. “This is talking to your community members and building relationships. A lot of officers really like this type of program but we have a hard time assigning a value.

“Should the program be continued? Yes. Should other communities consider it? Yes. But to get these results, you have to run it like Peel.” 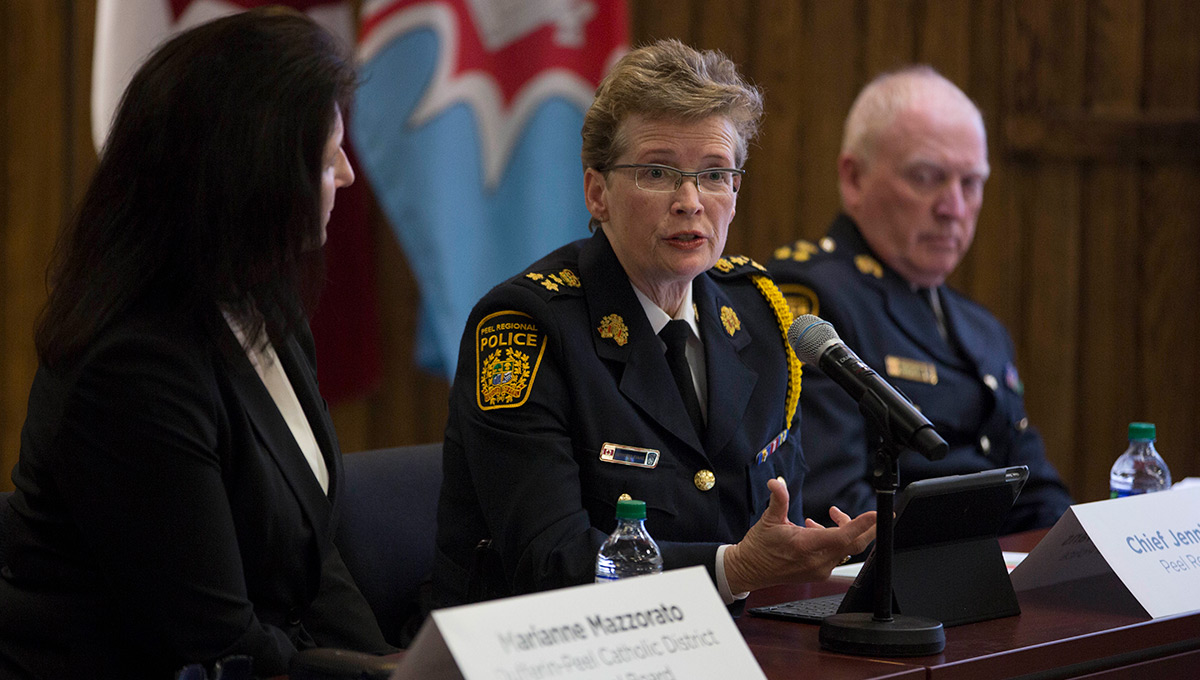 Building Relationships with Police in Schools

Cyberbullying and sexting have become more prevalent in recent years, Evans noted at the news conference.

“Officers, when they’re in schools, have an opportunity to talk to students about these issues,” she said. “They can provide information and are available for questions from students.

“There are ways to get better. Those are conversations that start within the schools, but right now I can’t see any problems.” 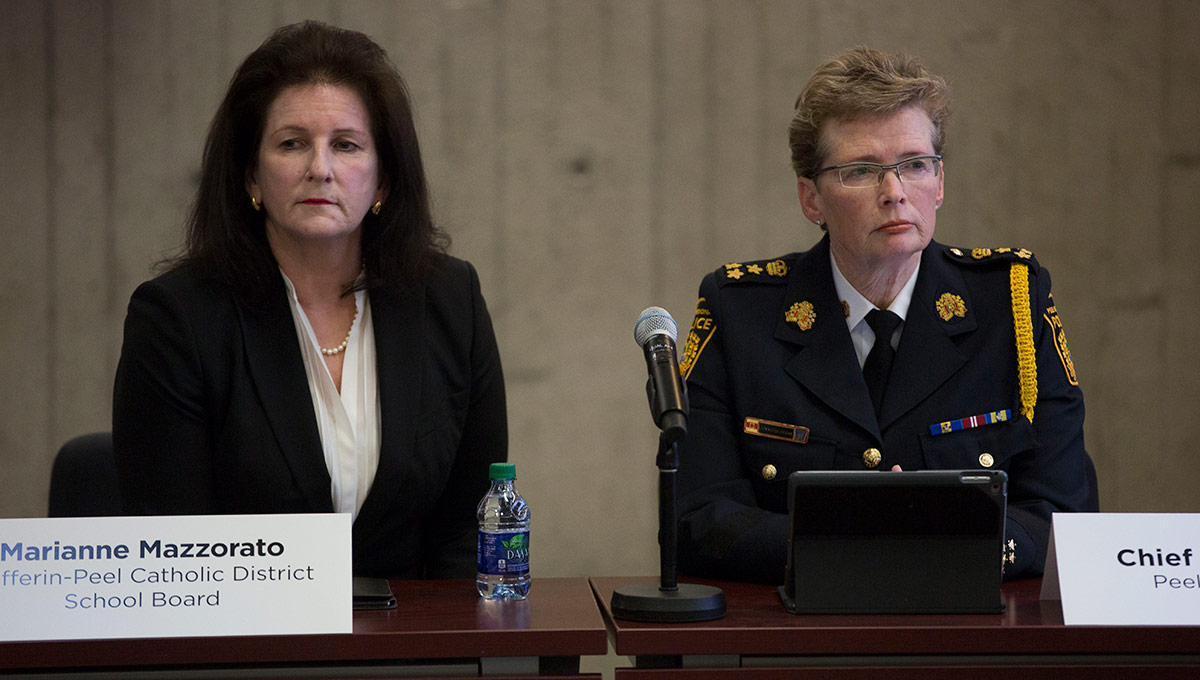 “It’s work that’s always evolving,” said Marianne Mazzorato, director of education at the Dufferin-Peel Catholic District School Board. “What we want from our partnerships is that not only students in schools, but also everybody in the community, feels more safe.”

“Through a partnership that is adaptive, responsive and focused on student success and well-being, we look forward to working together with police to support all of our students so that every child and teen feels safe, respected and included,” said Peter Joshua, director of education at the Peel District School Board.

“Until now, we knew relatively little about the activities of these officers, how they engage with staff, students, and the broader community, or the impact they have on the school environment,” said Bennell, director of Carleton’s Police Research Lab.

“This study helps to shed light on these issues. It shows that, by working with school administrators, school resource officers can help to make school a safer place for our children to grow and learn. We say this with some confidence because, no matter how we looked at this issue within our study, our results were overwhelmingly positive.”

The report was funded by the Social Sciences and Humanities Research Council as part of a Partnership Development Grant looking at the sustainability of policing in Canada. 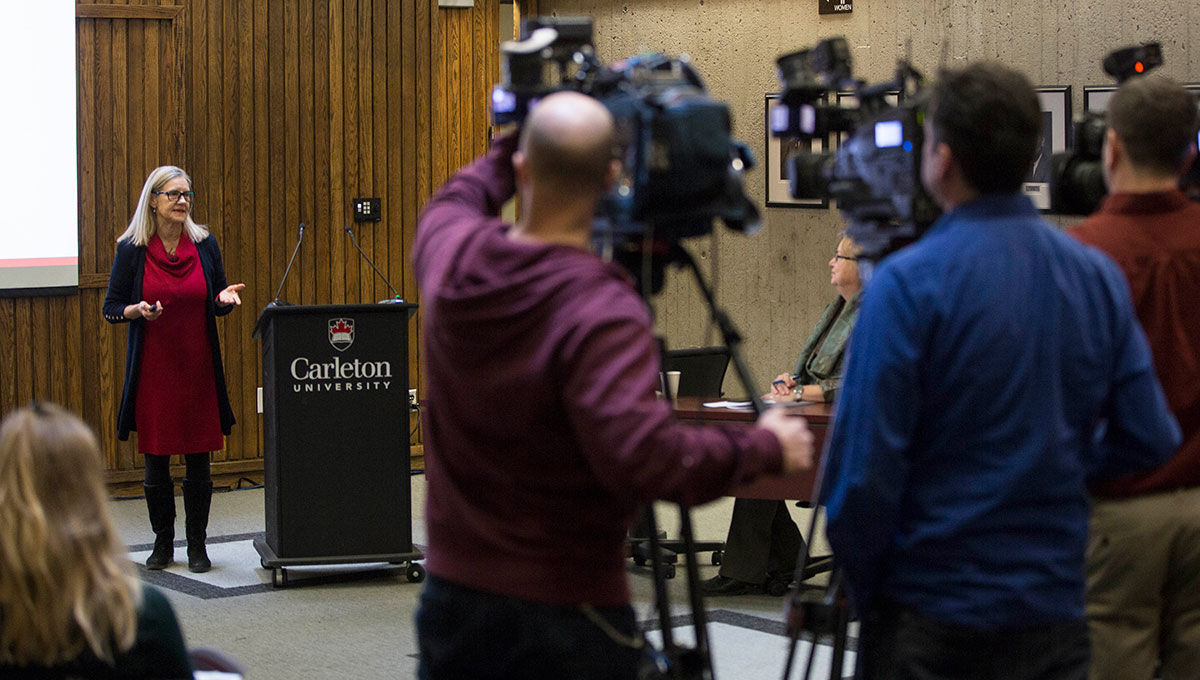 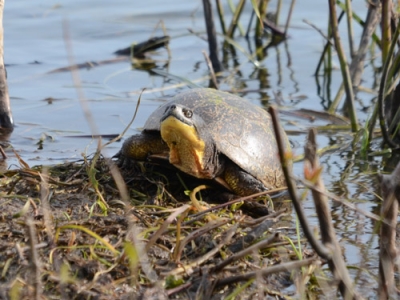 Canada’s landscapes, freshwater and wetlands are an important part of the world’s biodiversity and migratory patterns. They are considered part of planet Earth’s “natural heritage” and are protected as such. And yet, the country’s globally... More 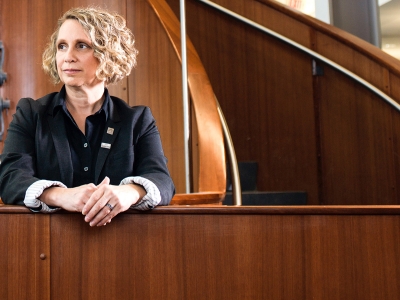 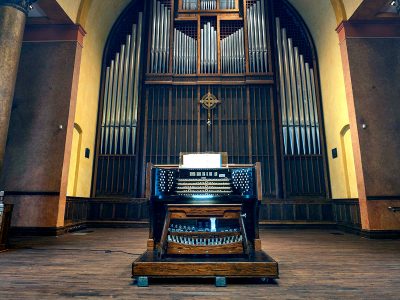 After almost eight months, an integral part of the downtown Carleton Dominion-Chalmers Centre (CDCC) has come home. A 54-year-old Casavant pipe organ—Ottawa's largest wind instrument—has finally returned to the church following a rehabilitation in which... More 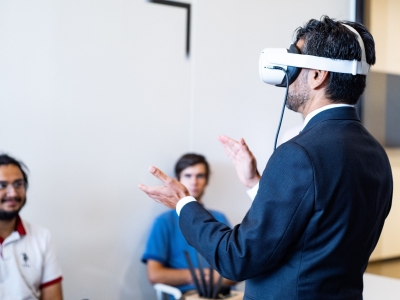