Like millions of Canadians, Carleton graduate student Michelle MacQueen tuned into the CBC broadcast of the last show of the beloved rock band The Tragically Hip.

At some point between the opening song “50 Mission Cap” – a song about the tragic death of a Toronto Maple Leaf player – and the emotional climax of frontman Gord Downie’s tear-filled screams during “Grace, Too”, MacQueen decided that she was going to research “Canada’s band”.

MacQueen is a master’s student in the Music and Culture program which is a program designed to give students a dynamic forum where perspectives in “cultural musicology” can be explored in a uniquely flexible and integrated fashion.

MacQueen was already aware of the band’s importance in Canadian rock music before Downie’s terminal diagnosis, but found the support around the final concert to be fascinating.

“I thought it was just incredible that so many people – truly from all across the country – were so enthusiastic about the band’s career and seeing them in concert,” said MacQueen. 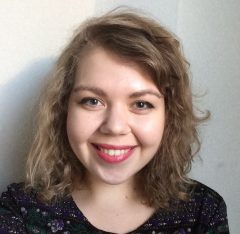 MacQueen was interested by the nationalistic elements of the show – including an appearance by Prime Minister Justin Trudeau – as well as the band’s connection to Canadian identity.

“Through this research I want to try and explore the effects that a nationally-coveted, iconic rock band can have on what we think of as Canada and what it means to be Canadian,” said MacQueen.

MacQueen wrote a paper called Criticisms and Counter-narratives to ‘Canadianness’: The Tragically Hip and Canadian Identity. She presented it at the Ottawa Graduate Student Music Conference and also at the International Association for the Study of Popular Music (IASPM)-Canada conference in Toronto last spring.

MacQueen’s paper completes a lyrical analysis of The Tragically Hip’s songs about hockey, the Canadian landscape, and specific Canadian places, to songs by other Canadian artists which contain those characteristics of Canadian identity.

“The narratives created in The Hip’s songs are much darker, much more critical. So by using these tropes and by framing them in a much darker manner, The Tragically Hip are creating counter-narratives to Canadianness; they are providing an alternate, more critically-aware reading of Canadian identity,” said MacQueen.

Read the full story on the Faculty of Graduate and Postdoctoral Studies page.

By Lucy Juneau This isn’t your ordinary university course. There isn’t even a textbook. Community Engaged Sociology, a team-based course looking to take book learning and translate it into action,... More

Carleton is pleased to announce that the Ministry of Advanced Education and Skills Development has approved the university’s Strategic Mandate Agreement, 2017-2020. Click here to view the document. The agreement... More

By Dan Rubinstein What do Canada’s ambassador to Italy, the Attorney General of Ontario, the Dean of Arts at McGill University, the president and CEO of the C.D. Howe Institute... More

What’s Open and Closed at Carleton During the Holidays

What’s Open and Closed at Carleton During the Holidays