As the country moves through stage three of reopening following the COVID-19 lockdown, Canadians remain very concerned about the future course of the pandemic, continue to support public health officials and are willing to follow their advice.

Those are some of the overall conclusions from a Carleton University School of Journalism and Communication survey of the attitudes of 2,000 Canadians to health information and the media conducted by Abacus Data from July 6 to 10.

The survey asked Canadians about their views on a range of issues as restrictions on daily activities continue to be eased.

More than three-quarters (76 per cent) of Canadians support the wearing of cloth masks to reduce the spread of COVID-19 whenever they are unable to maintain a safe physical distance from others. Only nine per cent disagree with the practice.

Asked about their use of masks in specific locations, 70 per cent said they wear masks while walking in crowds, at the grocery store, in shopping centres and on public transit, while almost one-quarter (22 per cent) said they do not wear masks in any location. Although most mask-use bylaws and recommendations currently focus on indoor and/or crowded spaces, 22 per cent also say they wear masks when walking or running outdoors.

Slightly more than two-thirds (68 per cent) of Canadians support the passage of new laws mandating the use of masks in commercial establishments. The strongest levels of support are found among those aged 60 and over, and among Canadians living in BC and Ontario (70 per cent), while those living in Alberta and Saskatchewan/Manitoba expressed the weakest levels of support for mandatory use of masks.

Canadians who do not support mask use justify their position in different ways. When asked to identify the primary reason they do not wear a mask, 33 per cent said that masks are “not effective in reducing virus transmission”. More than one in five (22 per cent) say that wearing a mask “violates my civil liberties” or because they find masks “uncomfortable and/or hot” (20 per cent). Finally, 16 per cent say they don’t wear a mask because they are “confused about whether they are necessary.” 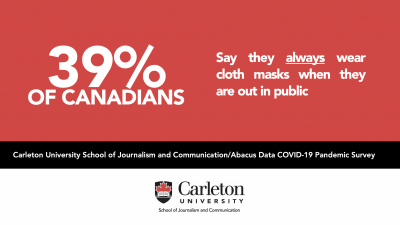 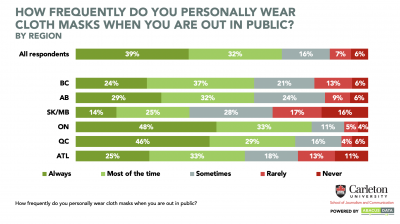 Other activities are off-limits for a smaller group of respondents with 18% saying they won’t go to a sit-down restaurant, a similar number will not shop at an indoor mall while 28 per cent will not stay in a hotel.

No more than 16 per cent were very comfortable engaging in any of the activities noted above, except for being very comfortable going to a sit-down restaurant (27 per cent), shopping at a mall (29 per cent) and staying in a hotel (21 per cent).

Canadians are also concerned about international and US travel restrictions being lifted too quickly with approximately three-quarters of respondents saying current restrictions should be lifted only when health officials say it is safe to do so. That includes the 14-day quarantine for people arriving in Canada. There is also widespread support for health officials making the call on when to lift inter-provincial travel restrictions (60 per cent) and 14-day quarantine for inter-provincial travellers.

Concern about easing travel constraints rises with the age of respondents, with those over 60 least willing to see things change in the near future.

Finally, only about a third (35 per cent) of those surveyed want to return to their pre-COVID-19 work environment when the pandemic ends. That could be because 61 per cent of those surveyed said it was less expensive to work from home. 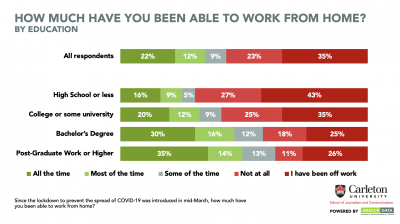 Canadians who expressed hesitancy about a COVID-19 vaccine say they are uncertain for different reasons. The most common reason given was concern about vaccine safety and the potential for harmful side effects (40 per cent), followed by worries about how extensively a vaccine will have been tested before it becomes available for public use (23 per cent). Other reasons include concerns about effectiveness in preventing the spread of illness (15 per cent) and suspicion about the influence of the pharmaceutical industry over public health care (12 per cent).

Among the nine per cent of respondents who expressed strong anti-vaccine views, suspicion about the influence of the pharmaceutical industry over public health care (41 per cent) was the most common reason given for their decision to refuse a COVID-19 vaccine, followed by concern about vaccine safety and the potential for harmful side effects (29 per cent). 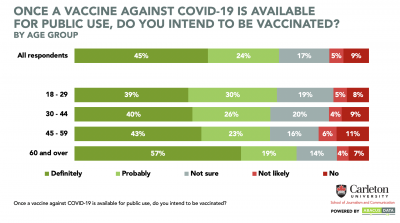 The risk of a second wave

There is widespread concern about a possible second wave of the virus hitting Canada.

Almost half (44 per cent) think the worst is still to come with COVID-19 with another 42 per cent were not sure. Only 15 per cent thought the worst was behind us. 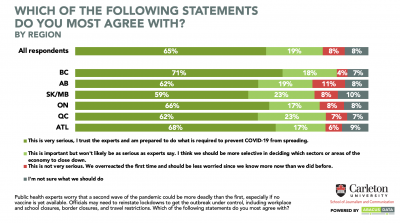 Two-thirds of respondents (65 per cent) agreed with the statement “[The possibility of a second wave] is very serious. I trust the experts and I am prepared to do what is required to prevent COVID-19 from spreading.” While that view was held by 60 per cent of those from 18-29, it was the opinion of 76 per cent of those over 60. At the other extreme, only eight per cent of those surveyed agreed with the statement “This is not very serious. We overreacted the first time and should be less worried since we know more now than we did before.” A similar number of people were not sure what we should do.

Only 19 per cent agreed with the statement “This is important but won’t likely be as serious as experts say. I think we should be more selective in deciding which sectors of the economy to close down.”

Governments in other countries have pursued a range of different approaches to containing the spread of COVID-19. Until a vaccine or effective therapeutics are available to prevent and treat infections, officials will need to develop or use other interventions to protect public health. Canadians show a willingness to accept some of these approaches, with stronger measures of support for certain interventions more than others.

Overall, there is strong to very strong support (73 per cent) for the use of mandatory mobile phone text alerts to notify people when they are in an area with recent cases of COVID-19. Governments have access to this notification infrastructure already, and in some provinces, emergency texts were issued to mobile phones to alert citizens to the threat of the pandemic and measures they should take to protect themselves.

Although some have called for more intensive enforcement of Canadian quarantine laws, there is mixed support for the use of mandatory GPS tracking that could alert authorities when someone has violated federal stay-at-home orders. Overall, almost half (47 per cent) of all respondents expressed strong or very strong support for this measure, yet 29 per cent were neutral or unsure and one-quarter of Canadians expressed weak or very weak support. Canadians residing in Western provinces were more likely to communicate low levels of support for mandatory GPS tracking than those in Central or Atlantic Canada. Those born outside of Canada were more likely than those born in Canada to support this practice.

Should Canadian governments set new laws requiring telecommunication companies to share location information of confirmed or suspected patients with public health authorities? Almost half (43 per cent) of all Canadians expressed strong to very strong support for this measure, while approximately one-quarter (26 per cent) showed weak to very weak support, and one-third (32 per cent) were neutral. Older Canadians were most likely to support this type of intervention (49 per cent support, 20 per cent oppose), while younger Canadians were most likely to oppose the introduction of such laws (36 per cent support, 31 per cent oppose). Education was also a factor, with support for this approach rising with levels of educational attainment.

Finally, the Canadian government recently launched a new contract tracing app called “COVID Alert” that can be voluntarily downloaded to a mobile device to help officials control the spread of infection. Using bluetooth technology, the app will notify Canadians if they have come in contact with someone who has tested positive for COVID-19. Almost half (41 per cent) of Canadians say they are very likely or somewhat likely to voluntarily download this app to their own device, while one-third say they are not likely or definitely not intending to do so. Those born outside of Canada showed higher levels of support: 55 per cent say they are very likely or somewhat likely to download the federal government app (22 per cent expressed opposition), compared to only 37 per cent of those who were born in Canada (36 per cent expressed opposition). Education level was also positively correlated to support, with expressions of interest in participation rising with each level of educational attainment.

Young people and likelihood of infection

According to recent analyses, young people are no less likely to become infected themselves and may risk spreading the disease to others in the community who are vulnerable – even though young people may be less likely than older people to require hospitalization as a result of COVID-19 infection. 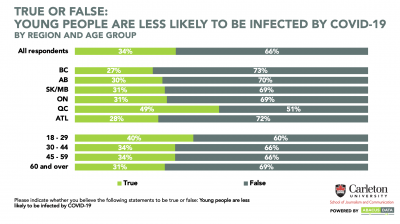 Consistent with our first survey done in early May, Canadians see public health officials as most reliable and trust them to provide accurate and credible information about the risks of COVID-19 followed by physicians/nurses and academics/scientists. They continue to think the country’s governments and public health agencies have handled the pandemic very well or somewhat well They also continue to pay much closer attention to the news than in the pre-pandemic period and see Canadian television newscasts, Canadian news channels and public health agency online sites as the top three sources for accurate and credible information about the pandemic.

The public opinion survey noted above is a project of the School of Journalism and Communication at Carleton University funded by its Faculty of Public Affairs and supported by Abacus Data. A first phase of the survey was conducted in early May, with a comprehensive report on the results of both phases to follow.

The survey was conducted with 2,000 Canadian residents from July 6 to 10, 2020. A random sample of panelists were invited to complete the survey from a set of partner panels based on the Lucid exchange platform. These partners are typically double opt-in survey panels, blended to manage out potential skews in the data from a single source.

The margin of error for a comparable probability-based random sample of the same size is +/- 2.17 per cent, 19 times out of 20. 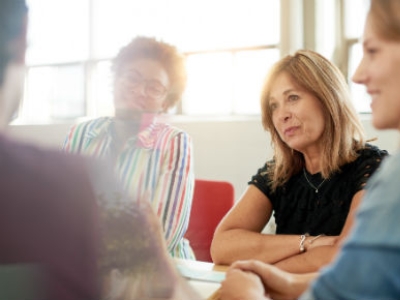 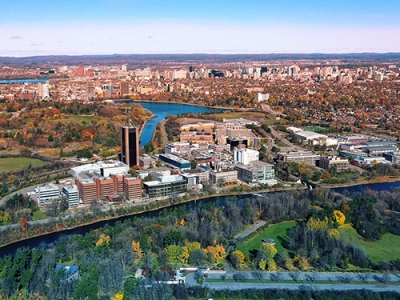 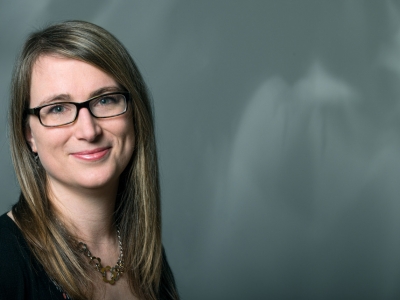 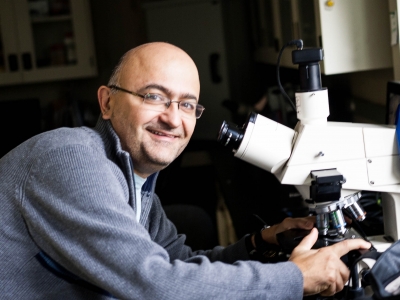