Robert (Bob) Laughton, former Carleton University Board of Governors Chair and Ravens Hall of Famer, passed away on January 27, 2019.

Bob was an important member of the Carleton community for many years, and was active until very recently. His lifelong commitment to Carleton, his leadership and guidance to its Board of Governors, and his devotion to the men’s basketball program leaves an inspiring legacy for everyone in the Carleton community.

For three years, starting in 1956, Bob was co-captain of the Ravens basketball team. He was a key athletic contributor early on in the program, helping the Ravens capture two Ontario-St. Lawrence Intercollegiate Athletic Association Championships (56/57 and 58/59). In 1958-1959, Bob was the recipient of the Doug Banton Trophy for outstanding basketball player best combining sportsmanship with ability.

His lifelong passion for the team led to the creation, with fellow teammate George House, of the House-Laughton Hoops Classic Basketball Tournament, which is considered one of the premier pre-season tournaments in the country. This led to Bob’s induction in to the Ravens Hall of Fame this past September (2018) in the Athlete/Builder category. 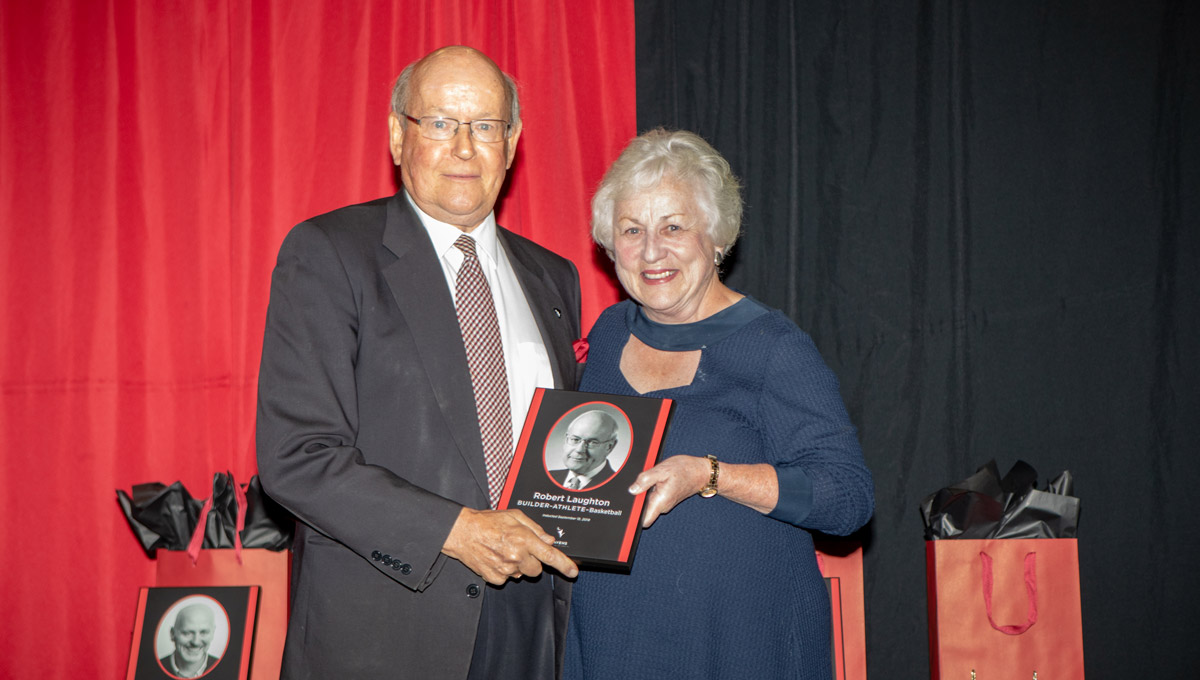 Robert J. Laughton was among five Ravens alums to be inducted into the Ravens Hall of Fame in Fall 2018.

In addition to his extensive athletic involvement, Bob served on the Board of Governors for 14 years, including serving as Board Chair from 1997-2000. Bob led the Board with outstanding skill and enthusiasm through a period during which Carleton was undergoing very great restructuring and renewal. In addition, from 1991-1992, Bob served as one of two alumni representatives on the President’s Commission on the Second Half-Century, whose report helped to shape new directions for the university.

“Bob was one of Carleton’s great champions on and off the court. He devoted his time and expertise for the betterment of the university and the Carleton community,” said Nik Nanos, current Chair of the Carleton Board of Governors. “Bob’s love for Carleton is evident in the many, many years he volunteered on the Board of Governors and through his devotion to Ravens basketball.”

A proud alumni, Bob was part of the last class to convocate from the First Ave Campus in 1959 (BA/Sociology). Carleton granted Bob an honorary degree in 2005 and the Carleton University Alumni Association (CUAA) awarded him with the Founders Award in 2012.

Bob went on to graduate with a law degree from Queen’s University which was followed by a prestigious career in law. He was called to the Bar in Ontario in 1964 and appointed as Queen’s Counsel in 1983. Bob was a member of the Canadian Bar Association, the Law Society of Upper Canada, and the County of Carleton Law Association. He was awarded the Martindale-Hubbell International Law Directory’s highest accolade, signifying that the recipient’s legal abilities are of the very highest standard and that his professional ethics and conduct are above question. In addition, Bob was also the recipient of The Gordon F. Henderson Award, which is given annually by the County of Carleton Law Association to honour a lawyer who is a member or former member of the association and who has made a significant contribution to the welfare of the community by performing charitable services on behalf of the community.

“Bob was a Carleton supporter through-and-through and will be greatly missed by the community,” said Nanos.