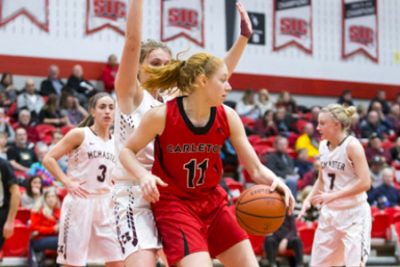 A pair of Carleton basketball stars will be on the hardwood for Canada at the Commonwealth Games, which run from April 4 to 15 on Australia’s Gold Coast.

Catherine Traer, who led the Ravens women to their first national title last month with 21 points in the 69-48 championship game victory over the University of Saskatchewan, is on the national women’s squad. She has successfully balanced basketball with her studies as a Political Science master’s student and an internship with the United Nations High Commission for Refugees.

“To be able to have somewhat of a good resume that doesn’t just have basketball experience was something that was really important to me,” the 23-year-old told The Canadian Press. “Because I have a lot of friends working in politics, working in the government and building their careers, I didn’t want to be left behind just because I was playing basketball, so I’m really proud that I was able to do a lot of it. But obviously it was really hard. A lot of sleepless nights working on assignments and then early mornings going to work or going to school.

“But I’m really happy I was able to do it, and I think anybody can do it. It’s not that hard. If you’re doing something you love, it makes it a lot easier. In the end, it was all worth it, for sure.”

On the men’s side, six-foot Ravens guard Munis Tutu is part of the Canadian team in Australia, joining a long tradition of Carleton men who have represented their country, including current national team members Phil and Thomas Scrubb.

Tutu is coming off his first season at Carleton after transferring from Loyola Marymount, an NCAA Division I school. He started all 23 regular season games this season and finished with averages of 8.8 points, 4.5 rebounds, 4.7 assists and two steals per game.

Tutu has represented Canada in the past, helping his country capture a silver medal at the 2014 FIBA Americas U18 Tournament.

Basketball has only been on the Commonwealth Games program once before, in Melbourne a dozen years ago. Canada did not enter teams in the tournament, and Australia won both the men’s and women’s titles that year.

Both of Canada’s teams make their Commonwealth Games debut April 6.